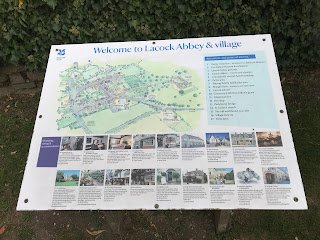 I don’t mind admitting that I am getting older. But just not out loud. And not to other people.  Even my wife.

So, I said nothing. I zipped up my jacket, pulled out my hood, and tried to hide a sneeze while cramming the National Trust map into a plastic case.  The map plotted a trail around the medieval village of Lacock. 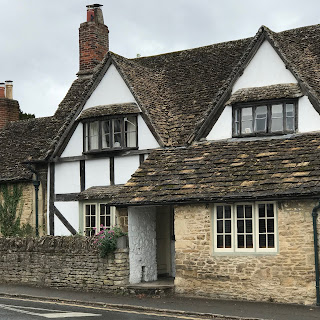 Like a holy trinity of tourism, walks, pubs, and historic sites have, as a grouping, guided our travels in Britain for many years. We treat the frame as sacrosanct, believing that physical exercise and cultural exposure will forgive caloric excess, and we plot our days along these lines even when temperatures numb fingertips and history lessons numb the mind.

Our plan for Lacock thus formed around a stroll through the countryside, a tour of the Abbey, and a stop for a bite and a beer. But the X34 bus ride from Chippenham proved just long enough to notice overcast skies, check the iPhone, and absorb the implication of “seventy per cent chance.”  Staring at dung-splattered fields and wiping drips from my nostrils, I wondered for the first time whether I had not dragged my feet across enough of soggy England, whether my body and spirit had not reached the time for drop-off-at-the-door tour buses, and whether any real harm could come from just staying indoors - forever.  I felt old. But incapable of admitting it audibly, I devised evasions. 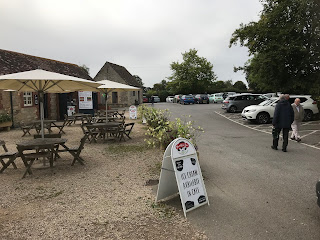 “Maybe we should stop here first,” I said pointing to the café and public toilets next to the Red Lion pub. “If it starts raining, we can kill time ‘til the Abbey opens.”

Over tea and scones, we studied the prescribed walk. It begins at the pub, leads down side streets, and loops around the village to the entrance of the Abbey.   Just a few miles in length, it usually takes less than an hour, short by English rambling standards. But with threatening skies, aches in important body parts, and a stuffed head, I thought “short is good.”

“This thing is not very long,” Michele observed while stirring her spoon and shaking her Fitbit. “Let’s wander off the trail, take our time, and enjoy the scenery.” 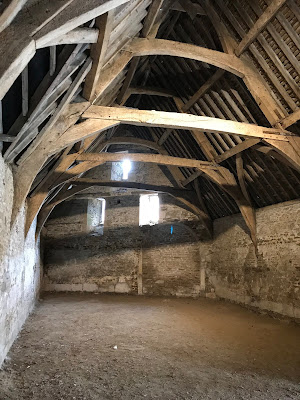 Having finished two teas and two toilet trips, I nodded and accepted that departure time had arrived. We bundled up, crossed the road, and headed down a pinched strip of pavement labelled East Street. The clouds had darkened, misty droplets fell, and, within a few steps, I grasped another opportunity to step back inside at “The Tithe Barn,” an empty stone building that would beg passing on days when sun fills the skies and more energy fills the walkers.

“We really should check this out,” I said pointing to a plaque that claims that the barn remains much as it was in the 14th century.

With my cold and flu, I felt that I too had been born in the 14th century and that I must be truly suffering to consider this dank and dark space a refuge.  But as I feigned interest in the bare floors and walls to stretch out time in the dryness, my mind drifted into imaginings of fleece and corn left by farmers grateful for their mucky, laborious lives. I could sense the sweat and tears of centuries in the fields and measured them against the minimal misery of my drizzle and sniffle circumstance.

“Let’s get going,” Michele said. “I’d really like to tour the Abbey gardens after the walk.”

Snapped back to the present, the woolgathered sweat and tears dissolved into the drizzle outside, and I sighed. 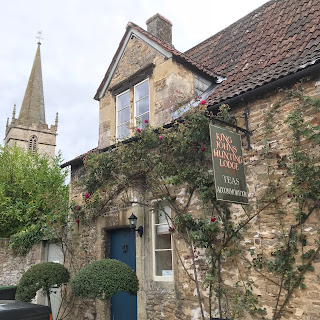 As we headed down the street and past the Village Hall, I noticed the Lacock Bakery and stepped inside to absorb puffs of oven air, buy a bun, and check the directions again.  The map told us to look for a half-timbered house.  There were many, and I instead focused on the sign for King John’s Hunting Lodge, ostensibly a tea room not worthy of mention on our map. 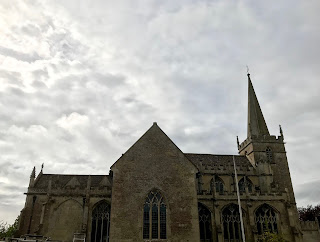 But checking the iPhone to orient, I learned that this building dates to 1210 and was, indeed, a place where King John ate venison, drank mead, and warmed his toes on weekends away from the barons and their annoying Magna Carta.

“Half-timbered is not much of an identifier in this town,” I said standing in the warmth by the bakery doorway.  “This could take some time to figure out and maybe we should go into King John’s for another tea.”

“It’s ok, forget that - the other marker on the map is easy,” Michele said pointing toward a grey rectangular tower. “See, it’s that church.”

The map takes walkers past St. Cyriac's and down a hill to a bridge and over a brook.

But I stopped, opened the churchyard gate, and, once again, suggested we step inside. 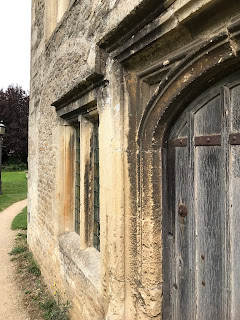 Construction work blocked the obvious main entrance, and I wandered around green tombstones and grey stone walls for about five minutes looking vainly for an alternate. Finally, unwilling to abandon the prospect of more time indoors, I lifted the iron latch on a weathered, unmarked door at the rear. It clanged and creaked as it unveiled a chapel, high ceilings, butt-worn pews, and the smiling face of a woman holding bundles of flowers.

Though busy preparing for a wedding, she took time to tell us about the church and its origins in early Norman times.  Later, Wikipedia elaborated describing St Cyriac's connections to famous characters like Edward of Salisbury, an Anglo-Saxon who managed to gain favour with William the Conqueror in the post of High Sheriff for Wilshire.  Another of the church’s early Saxon sponsors did not fare so well in the new regime. He ended his days blind and mutilated for not getting with the Norman program. 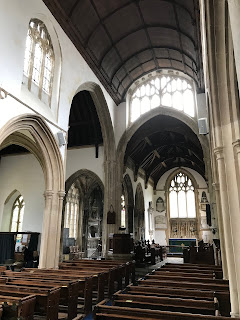 These stories have helped fuse the church to my memories, but on the day of our visit, another part of its history enthralled me more.

Upon our entry, the wedding-prepping woman directed us to a display with newspaper clippings and photos of a plain looking drinking vessel now renowned as “The Lacock Cup.” The cup, tagged by experts as one of the best examples of medieval silverware anywhere in the world, was donated to the church about four hundred years ago and thus survived as a sacred vessel.

The clippings described the Cup’s importance, but they intrigued and amused us most with recent history and controversies.  Just a few years ago, the Church sold the cup for over a million pounds to the British Museum in order to pay for building maintenance; evidently this included the construction work that had blocked our entrance to the church that day.

I found the story a little funny and touching because a group of Lacock residents had campaigned against the sale and even went to the ecclesiastical court to fight their own church on the issue. The locals believed the cup to be a vital part of village heritage but lost their case because of the critical need for church repairs; I thought perhaps it was also a recognition of Lacock’s abundance of heritage and tourism touchstones. 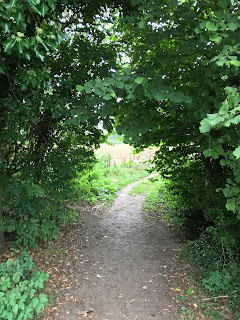 The story diverted our minds and bodies from the on-again-off-again rain and wind for a while, but it eventually became obvious that we could not impose on the building and its wedding prepping occupant any longer.

“That cup story made me think of tea,” I said also thinking a toilet might be handy.

“Sure, as soon as we finish the walk,” Michele said. “Let’s get going.”

I looked at the map.  Short of breaking into a cottage or hiding under a bridge, I saw no avenue for warmth, shelter, or bladder relief until the termination point.

Though I was beginning to reconsider my age and pride, I pulled the hood over my head and pushed any hope of near-term comfort out of it.

We put boots to the ground and headed out. 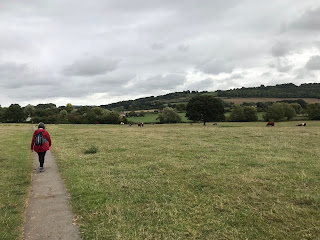 Within minutes, the rain picked up, my nose poured down, and my body pained.  But the Lacock Walk is easy to follow.  Pavement covers one portion cutting across a sheep field, and other way markers are obvious things like bridges, buildings, and the river.

The simplicity of the walk made it easy to daydream, and I found my mind going back to the Tythe Barn, King John’s Lodge, and St. Cyriac’s: sites that are not often stressed in promotional materials on Lacock, which usually feature the ancient Abbey and its gardens, a history that includes the innovations of photography pioneer Henry Fox Talbot, and the cluster of National Trust buildings that provide locations for film and television productions from Harry Potter and Fantastic Beasts to Pride and Prejudice and Downton Abbey(the latter took over the place again just a week after our visit). 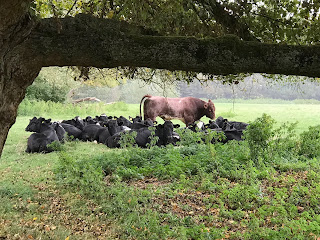 The swirl of what we had seen and what we would see that day made me forget the rain, the discomforts, and the age of my legs. When we neared the end of the Lacock Walk, I found myself wandering off, pausing, and taking photos amidst mud, wind, and glowering cattle.

By the time we crossed the last bridge and reached the Abbey entrance, I was wishing the walk had a few more miles.   As Michele got entrance tickets and inquired about bathrooms, I checked the iPhone again. 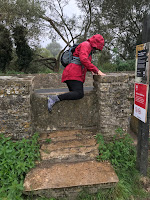 The weather forecast called for more rain, but I searched for other information as well.

“Hey, it looks like there are similar walks around Castle Coomb and Malmesbury,” I said. “Even longer.”

“Let’s talk about if over tea,” Michele said pulling back her hood, rubbing her lower back, and trying to hide a sneeze.