The Note Who Wouldn't Float 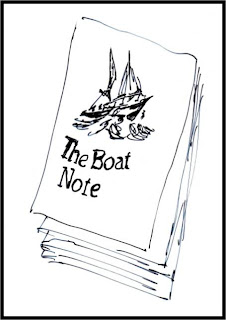 I have an ingrained fear of the month of June.

It flows down over my head and along my spine.  It started years ago when I signed on as assistant deputy communications chief in the Department of Oceans, Big Tuna and Bitumen Development.

Every year, on those dark dates, just before the Minister and other Members of Parliament sail off for the summer, the department is awash with demands for “something to announce.”

“He’s going to be out roaming for months, and he needs something to announce every place he calls on,” the Minister’s Chief of Staff would foam. “And make it good!”

These requests always caused panic down in the communications room.  We felt helpless in the face of tempestuous policies and appointments - the flotsam of Ministerial announcements - and we were never sure what to do.  Fortunately, our branch director, Jacques Le Capitaine, was an old hand and helped us navigate around the foggy reefs of political priorities.

He kept his own antidote for stress in a bottle below desk. When travelling with the Minister over the summer announcement season, Jacques would drink even more, but he always made sure to buy one for “the Old Man” before indulging himself.

“It’s a good thing to be on friendly terms with the Old Man,” Jacques once slurred. “Remember, when it comes to politics, we’re just taggin’ along for a ride over the rough, grey waters that are his domain.”

Jacques had the heart of a political hack. During the ’84 election campaign, he worked at the party headquarters and still liked to imagine himself as having command over a crew on a valiant mission. He talked wistfully of his days on a course well charted and true as the dreaded summer season approached.

“I have a plan on how to handle the month of June this year,” Jacques whispered over the wall of my cubicle one day in early spring. “Meet me at the Happy Adventure for a drink at lunch, and I’ll tell you about it.”

All morning my mind raced.

“Jacques must have a bunch of ideas for announcements,” I imagined, “We can start working on them now and have things ship shape by summer.”

Jacques smiled broadly when I joined him at the bar.

“My plan is to take my vacation starting June 1st - I qualify for eight weeks this year, so I’m going on a cruise - I’ll see you after the August long weekend,” he said. “You’ll be in charge while I’m gone.”

He nodded and ordered another round. Later as I staggered westward back to the office with the sun sinking below the horizon, my heart slipped below the churning waves in my stomach.

The next day, I scanned the department’s sea of newspaper clippings for summer announcement ideas.  One theme streamed through all stories; the fisher people on the far coast were losing affection for the Government of Castoria. For decades, the government had encouraged them to expand the fishing fleet. Then, when the fish disappeared, the government provided assistance to reduce the size of the fishing fleet. Now, the fishers and would-be fishers had no boats and fishing licenses left to sell back and no other means to make a living.

Then, less than a week after Jacques shipped off for his vacation, I was summoned to a departmental management meeting and implored to “come up with some announceables.” I was as prepared as I was ever going to be.

“Well, sir, as you know, dark clouds loom off the far coast,” I said gripping my little briefing note. “We believe that it would be well received if the minister could announce the reinstatement of the fishing vessel building assistance program to help people acquire boats and equipment once again.”

“But why would people want that - there are no fish left to catch,” said the Department’s annoying Senior Scientist-Librarian with bone-chilling tones.

“Well, if they do acquire boats and outfit them in a menacing way," I said standing firmly and keeping my balance. "They could in turn qualify for assistance to retire the boats under the current, fully funded, but not fully exploited fishing vessel purchase program.”

An eerie quietness drifted over the room, and the mood grew dark.

“This will never float,” stormed the Minister’s Chief of Staff.  “There are so many holes in this thing - I can’t send the boss out with this piece of junk - it’s too dangerous.”

I expected a rough ride for our note, but this blast was worse than feared. Then, he explained.

“Love the idea – it’s great, but we need exhaustive communications strategies, a specially designed masthead, and a bigger note,” the Chief of Staff added as other heads around the table bobbed up and down. “Something about 150 to 200 pages in length rigged up with long media lines and charts  - that's what we need.”

Though my plan was not really rejected, it had been delayed until more word-filled paper could be assembled.  That was three years ago, the proposal remains tied up. Jacques came back to take early retirement, the department brought in a new director from the accounting office, and we have a new minister.

I am assigned to the “Boat Build and Buyback Program” communications plan team and am charged with keeping the proposal afloat until the conditions are just right. I am not completely insulated from the squalls and strains of the month of June.  But I have hired a cubicle boy to help out, got a chair with arm rests, and now have a bottle hidden under my desk.