Doing your Best at the Lit Fest 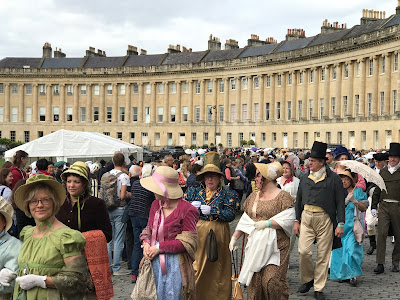 When travelling, my wife and I try to work as volunteers at writers’ festivals or book fairs. You get a chance to meet authors in informal settings; you make friends with local book lovers; you often get free passes; and you have the opportunity to feel useful.

With some of these ends in mind, we sent inquiries to the Literature Festival in Cheltenham and to the Jane Austen Festival in Bath prior to our trip to the U.K. this year. An auto reply from the first informed us that the application process had closed. Human organizers of the second responded saying that our names would be added to the back-up list.

But their email included a winking imoji with a tongue stuck in its cheek. 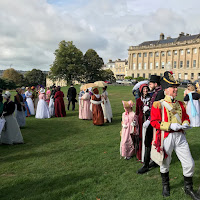 We thus resigned ourselves to trying to create an immersive, participatory experience at these events as humble attendees. The Jane Austen Festival makes this easy if you are one of those who doesn’t mind dressing up in odd Regency period costumes, bowing, curtsying, and saying things like “Might I take leave m’Lady to adjust my breeches.”

I was not among their ranks, but still felt like a bit player in a grand performance watching the kick off Promenade and later haggling over hats at the Festival Fayre. We were determined to attend as many other events as we and our budget could handle. But with many favourites sold out, we bought tickets to something called “Austen Undone” without knowing what a “Theatrical Comedy Walk” was all about.

It was great. I’m still smiling. 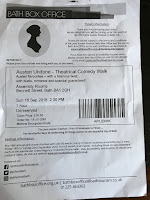 Actors from a troupe called the Natural Theatre Company lead you and a group of about a dozen others around Bath while acting out a play that echoes Jane Austen’s romance and style in an over-the-top way. The roaming actors pepper the tour group with questions and requests for counsel at every stop. I was caught between two female characters engaged in a sword-fight duel with umbrellas that still cracks me up and probably would have been fun even if I had been stabbed by a brolly.

You felt part of something, and for that reason, it might have been the best part of the Jane Austen Festival for us.   But we were also impressed elsewhere by costumed ticket takers who always seemed to be playing a part and by speakers who entered the audience before their performances to banter about Jane.  Michele said she had a similar feeling at the Regency Dance Workshop, an event I had to skip after reading that the requirements for participants included “lightness and grace.” 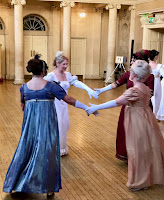 Our time at the Festival concluded at a spirited operatic version of Austen’s Persuasion. The performance was pretty straightforward, but the intimacy of Bath’s Mission Theatre combined with bumping into some of the cast at Sally Lunn’s Eating House afterward left us with another sprinkle on our immersive experience.

Hoping to build on this a few weeks later in Cheltenham, I might have even agreed to put on a top hat, tail coat, and cravat as the temperatures had dropped and wind made the outdoor venues chilly.  But we spent the bulk of our time in the ornate, century-old assembly room called “The Town Hall.”

The events in the Hall included a monologue presentation by historian and writer Sarah Dunant.  Dunant did an excellent job with an animated presentation focused on her specialty of Renaissance history and the ultra-quirky Borgia family. 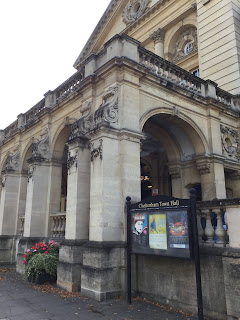 Still, I found the interview-style session with Booker prize-winning author Pat Barker particularly engaging. Though best known for historical fiction around the world wars of the 20th century, the seventy-five-year-old author came to Cheltenham to talk about a different era and to flog a different kind of novel: The Silence of the Girls, which tells the story of The Iliad from the supporting-role perspective of Briseis, the war-prize woman awarded to and then taken from Achilles.

The interviewer was Dame Mary Beard, a Cambridge classics prof and television presenter.  I don’t know if Mary Beard volunteered or got paid for this gig, but I was struck by how she never tried to impress the audience with her ocean of knowledge on the subject at hand and instead kept the focus on Ms. Barker, her work, and her thoughts. 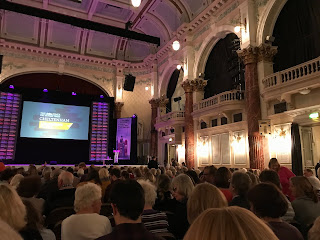 “Yes, but you really should take advantage of the opportunity to meet Pat and have her sign a book,” she said when mention was made of the availability of Beard’s own works on site.

Although an expert on ancient Greece and capable of steering the conversation in this direction, Beard instead questioned her guest on contemporary issues such as the #MeToo movement and the state of fiction writing today.  Barker mused that we might be in a “#SoWhat?” moment in respect to the latter and encouraged writers, particularly those of her vintage, to help the situation by taking more risks.

“If you’re not taking risks (at my age), then what are you hanging around for anyway?” she asked in a forthright British way. 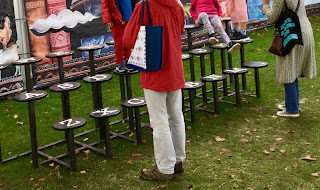 As we left the hall after the talks, we passed a long line waiting to have books signed, and while I really enjoyed the events as a paying attendee, I found myself envious of the volunteers directing the crowds. 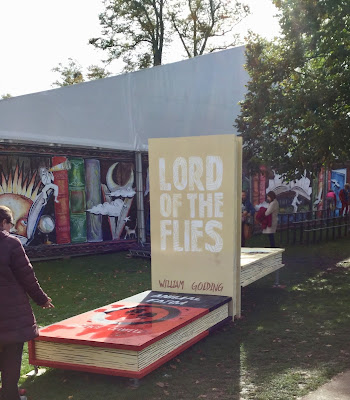 It caused me to reflect on Mary Beard and others working in supporting roles that day.

I loved watching people working to promote children’s literature at the outdoor festival site by helping kids climb giant books, stand for photos on oversized typewriter keys, and pose with mascots. The people serving food from trucks and tents added to the festive atmosphere with weird sausages, steak pies, seafood, and macaroni and cheese in a cup.

The volunteers taking tickets at the Town Hall included a woman who jumped up, walked around the tables, and led me out onto the street and down the block to make sure I knew exactly where to find a cab for the train station.

The fibre that links all these incidents and people, as you may have noted, was the simple desire to be helpful: to be useful. Their work reminded me of why volunteers are valued at writers’ festivals and book events and why people like me get to enjoy privileges and certain benefits in this role.  It may also explain why attempts to replicate the experience as an observer and simple attendee fall short and, in comparison to the active role and engagement of the volunteers, can seem hollow. 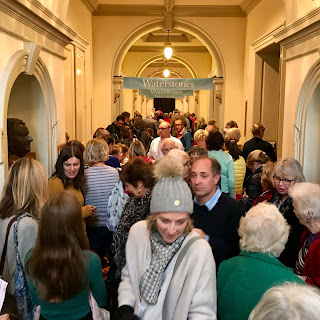 Thinking about how I could be helpful after the fact prompted me to write this blog, believing that it’s worth doing even if the only person it helps is me.

It will remind me to plan far ahead, to apply to volunteer early, to contribute, and maybe to try harder to be helpful in other circumstances as well.

For, of course, you don’t have to volunteer at a book event to be useful.