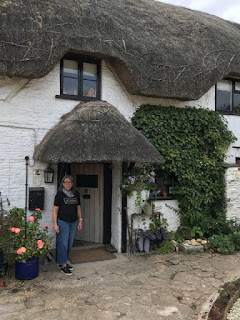 “It’s embarrassing,” I said. “And I feel like I have to explain myself.”


I took photos, measured door frames, and made notes confident in what I was doing though Michele questioned my actions.


“Are you sure there is nothing wrong with your head?” she asked with genuine concern.


Thanks to the generosity of a travelling friend, we were in the Wiltshire village of Sutton Benger living in a four-hundred-year-old English cottage.
An archetype “chocolate box house” of the kind Cadbury’s used to decorate its products in the late 19th century, Bell Cottage had a thatched roof, wood beams covered in a plaster-like mixture, and thick walls, maybe up to three feet wide in places.  It once served, we were told, as a home to the gamekeeper or other manager-level servant on an early Viscount Wellesley’s country estate, and it had character and class. 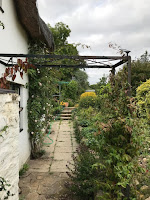 plants and lush green.  Roses and vines climbed up the sides of the building, and a dry-stone wall hugged the property.  Inside, modern conveniences flowed into the comforts of a home with personality.


It was all very pleasant. But my preoccupation rested on those wood beams and thick walls.


I kept hitting my head on them, over and over again, as I passed through doorways built for people who were either much shorter than my breed or bent over with heavy loads of game and grain.


Our host had, upon meeting us for the first time, warned us of the door dangers.  In pointing them out, she looked past 5 foot 3 inch Michele.


I’m 6-4 and took note, being familiar with the need to duck and stoop.  But two months 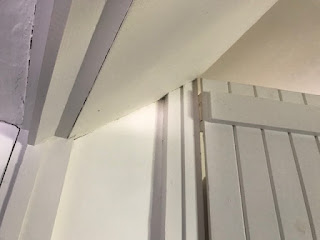 later, I was still hitting my head with cracking sounds audible in the next room.  Every day.  Sometimes several times.  Or at least so it seemed.


So, on this day as our time in the cottage neared an end, I decided to inventory and inspect the doorframes and other contact points throughout the house to try to understand and document the reasons for my continuing cranial collisions.


“Guess what?” I said presenting my report to Michele. “The entrance way has four different doors leading off it: one going outside, one into the laundry room, one into the kitchen, and one into the back living room.” 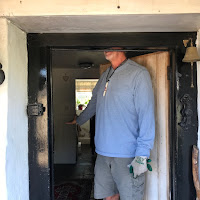 “They’re all different heights.” I said with a whimper trying to describe the challenges I faced. “One hits my forehead, another my nose, the entrance comes below my chin – almost to my shoulder for Christ’s sake, and the kitchen door looks fine from the side, but skims the top of my skull.”


I showed my photographic and numerical evidence and then pointed out that not only were these and other doorways dungeon-wall deep, but in places they changed heights several times in the course of the passage.  On stairways, the hard surface above could be over your head as you entered from one direction and below it at the other end.


“So, why don’t you just crouch down all the time?” she said with sincerity. 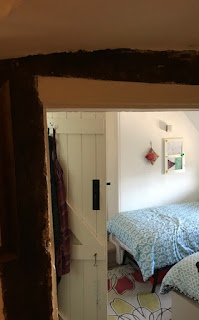 “Maybe, I should always walk on my hands and knees,” I responded with less sincerity, imitating a Neanderthal in both posture and temperament. In any case, varying heights and thick doorways were not my only challenge.
In the den upstairs, a white plaster wall enclosed the doorway to the bathroom, but within the wall, dark beams formed a secondary frame.  At a glance, the timber looks like the actual doorway and gives the appearance of something much higher. The white plaster now carries light scuffs from many encounters with the side of my head.

“I know that taking photos and measuring seems a little crazy, but like I said, it’s kind of embarrassing that I’m still hitting my head after months in this place,” I said satisfied and resting the case in my defense. “I felt like I had to justify it.”