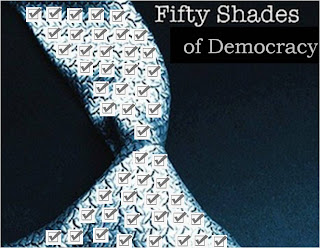 The Dominion of Castoria engaged in a strange and risky form of democracy.

It relied upon the submissiveness of its people and their willing acceptance of a perverted kind of political bondage.

Every four years, the country would hold an election to decide what colour of bunting would dominate and truss all public buildings and administrative infrastructure in the country.  But because of Castoria's strange electoral system, some felt that they had no real control and were always edgy.

Officially and superficially, the dominating party in the legislative assembly selected the colour with the consent of the people. The system seemed safe on that level, but a light cut below the surface revealed it to be a façade covering a twisted and asocial practice close to home marked as First-Tied-to-the-Post Voting.

Under the legally binding Castorian constitution, the most votes, not a majority, decided the results on the local level.

Even if a man received but a weak share of the popular vote, he could claim power as a banner-tying member of the dominating side in the assembly. Increasingly, the results of this process manifested in a legislature that caused other parties unease.

Castorians found this system acceptable when the country was young and defined by two roughly equal, sparing interests.  Members of one group wanted all of the houses and public buildings tied up in a cold, clean blue.  The others were chilled by the thought and advocated a warm and soothing red as the national standard.

They tangled in intercourse as a twosome at the constituency level, and although they, on occasion, prodded each other into abnormal behaviour and even gerrymandering, their interactions produced a tolerable arrangement.

As Castorian society matured and evolved into more nuanced, shaded political views, the citizens longed for other hues and colour and engaged with other parties. Some other shades of blue and red, even a greenish mix and an orange crept into the assembly as a result. Still, many Castorians believed that they had little power within this winner-takes-all arrangement.

Over time, some parties challenged the terms of the social contract demanding other options.  They wanted to just "run-off."  To gag the protest, the assembly conducted polls and national consultations on the passionate run-off idea.


Those with the power now included those other colours and tinges elected under the established system of domination.  They mocked the protests and portrayed the run-off threat as a sick plea to scar Castoria with many different streaks and blots.


In the end, the people abandoned the ridiculed proposition.

Rather than the uncertainty and personal responsibility of the run-off, they chose the strange comfort of submissiveness and returned to the perversion of their first-tied-to-the-post electoral system.
++++++++++++++++