The Appointment of Malice 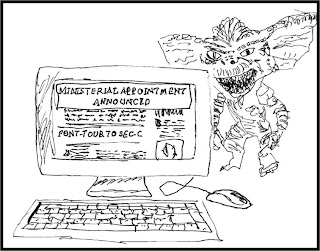 On the first day of April, the following announcement appeared on the splash page of the department's website.

----
Appointment to the SEC-C Commission

The dour website, with its stock photo of the Minister, national symbols, and list of services, drew few visitors, and the announcement might have passed without notice for several weeks.  But the webmistress, Glossette Rigaud made it an element of her daily ritual to mouse, click, and verify the linkages on it.

Ms. Rigaud was grieved when she saw the appointment announcement as the words and their formatting had not passed through her webmistress server. Being excluded from the processing of a vital Ministerial announcement distressed her.  The slight came at a crucial point in her lifeless career. Approaching her thirtieth birthday and facing the upper end of her pay scale, she had applied for a position that would place her among the exalted department employees assigned to the Minister's Office.

"May I speak with Ms. Rigaud, the Minister's Assistant," she imagined telephone callers asking in hopeful breaths, only to be diverted by the receptionist as a matter of principle. She would not flaunt her new Minister's Assistant business cards, but they would be hers to use should she ever chance to be introduced incorrectly as merely "the webmistress."

Within minutes of sending an email inquiry on the announcement, the Minister's Press Secretary Ridley Shillitoo appeared at the entrance of Glossette's cubicle.

"Well, I assume it's been taken down," said the Press Secretary vibrating with anger.

"What do you mean, sir?" Glossette said deferentially knowing that this man had her Ministerial Assistant aspirations in his hands.

"This is some kind of sick joke," Shillitoo said now turning red. "Didn't you know that Le Pont-Tour is a big critic of the government, a failed provincial politician and ... and ... and ...  brother-in-law of the Leader of the Opposition ???"

"Sir, I had nothing to do with this," Glossette pleaded with watery eyes. "It must've been a hacker."

"Well, it's your mess - deal with it," the man shouted turning and waving his arm as if to slam an imaginary cubicle door. "And by the way, there is no such thing as a Salterton Sexy commission."

Glossette was so upset that she forgot to block the malicious web page for hours. During this time, RSS feeds fed out, and the next morning, the newspapers and radio broadcasts reported the appointment of a high-profile political opponent to what was presumed to be a post preserved for patronage.  The online paper in Salterton covered the unusual appointment with enthusiasm.

The National Police Force investigated this serious breach of Ministerial announcement security. The entire departmental website was taken off the internet, and all digital information was destroyed. As a precaution, the department contracted future maintenance of the site to a software company in East Asia, saving the taxpayers of Castoria great sums as well as ensuring the security of ministerial announcements. All department employees with access to computers or smart phones were interviewed by the state police, but none more ruthlessly and repeatedly than the unfortunate Glossette Rigaud.

At the same time, celebratory media coverage of the unusual, apolitical appointment spread across the land.  The Minister was applauded for his integrity, and, amid this praise, the Castorian Privy Council made what was once false and malicious real - with the creation of a Salterton commission and with Le Pont-Tour's appointment as its first member. The appointment was re-announced for good measure.

Walters was commended again in all quarters.

"The Minister would like to see you," Shillitoo told Glossette the following Monday morning. "He wants to commend you on the innovative, unauthorized web announcement initiative and to confirm you as an assistant in our office."

"Please forgive me, Mr. Shillitoo, but I decided to withdraw my application," said Glossette Rigaud, now confident in the rightness of her humble web-based vocation. "I have accepted a job offer from the online Salterton newspaper – the editor, who likes to laugh a lot, said he was sorry for having caused me so much distress."