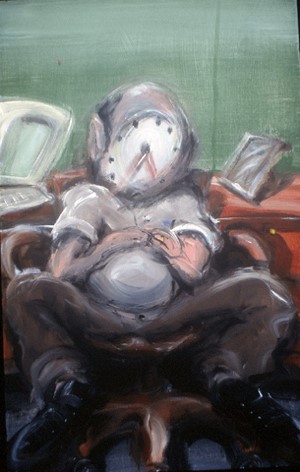 I own a unique and intriguing work of art.

The painting has a poignant history that touched me personally. It has been featured in newspapers, magazines, and art exhibitions. It draws vigorous commentary from everyone who sees it.

But I am not sure I really get it.  Sometimes, I am not even sure I should like it.

Rene Price, the artist, gave it to me as a friend and to thank me for participating in a panel discussion at an Ottawa art gallery six years ago.

The forum launched an exhibition showcasing some over-the-top paintings, sculptures, and other works that satirized the dullness of bureaucracies. 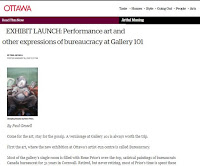 Gallery 101 invited me at Rene's suggestion to speak because I had just published a parody of Don Quixote, placing the hero within a federal government office. I was asked to reflect on the parallels between the Spanish classic’s imaginary world interacting with ordained truths and life as an employee of the Government of Canada. 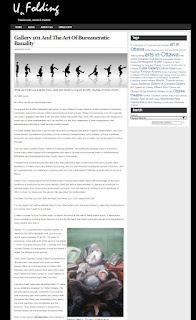 I thought I could do that without much effort.

The kick-off to the Bureaucracy and Art exhibition included other writers, Rene, and a young Montreal-based visual artist named Immony Men, who used Post-It notes to create a wall-sized pale yellow and grey image of an office cubicle.  The on-site, painstaking construction of the work, little-note-by-little-note constituted a kind of complementary performance art and tribute to the tedium being commemorated in the exhibition.

Later I found out that I also had attraction as a speaker at this event because I worked in Building M-58, the administrative headquarters at the National Research Council of Canada (NRC) Campus on Montreal Road in the east end of Ottawa.

Rene knew art, bureaucracy, and, as it turns out, NRC well.

He comes from an artistic and culturally sophisticated family.  His maternal grandfather Marius Barbeau effectively founded the field of Canadian anthropology as a renowned champion of Indigenous and Québecois folk culture.

In talking to Rene, I learned his father Art Price, who was a filmmaker, sculptor, and painter, loved Ottawa and adorned our city with many of its iconic installations.  These include the giant silver ball in front of my office building at NRC - M-58. NRC and that big stainless-steel ball hovered over the Price family throughout Rene’s early life and career.

That career included over thirty years in government offices where Rene tried to fit his artistic soul into the need for a steady income by working as an exhibit designer for Parks Canada.  It sounds creative and did involve a bit of travel, but also required a lot of time in government office spaces plagued by politics, protocols, and the dreariness of any bureaucratic environment. 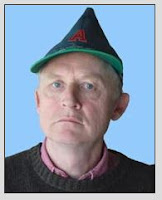 It was ok for Rene most of the time.

But in the 1990s, the angst magnified under a string of layoffs and budget cuts, and Rene was impelled to paint works that satirized and skewered it all as an emotional outlet.  This led to the wild collection put on display at Gallery 101.

Some of the works disturb people.  Others amuse.  I particularly liked the self-portrait-style sculpture Rene labelled an “Inaction Figure.”  I also laughed at his business cards.

But one work drew more media and public attention than all others combined, and it illustrated all newspaper and magazine stories as well as publicity for the show: that is the greyish green painting (shown above) that  Rene called “Sleeping Beauty” also “Cinderella,” but mostly “Sleeping Beauty.”

It featured a pudgy, cubicle-confined office worker whose head formed the face of a clock with hands inching toward the end of a work day.

It exuded monotony and a sad kind of funniness.

This is the painting now in my possession.

When Rene offered to give me one of his works in the wake of the panel discussion, I jokingly asked for “Sleeping Beauty,” knowing it to be the prized piece of the exhibition.

“Well, actually, it’s kind of hard to find a permanent home for it,” he said. “It’s pretty big.” 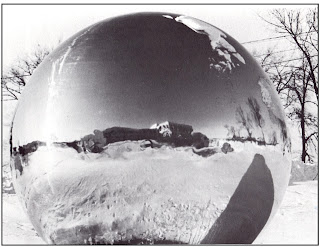 A week later, he arrived with the oversized painting at the door of my office in that building overlooking his late father's over-sized silver ball.

A few of my colleagues kindly gathered for the sort-of unveiling, some donuts, and coffee.  An appropriately banal bureaucratic celebration.

Acrylic on wood, the painting, which measures a few inches over three feet wide and a few inches under five feet high, weighs a bit and could be considered a little awkward. Its dimensions do not lend themselves to any kind of standard living space.

But it seemed, at least in a physical sense, to fit nicely into my oversized office.  Because of my role then and later as Secretary General of NRC, my office acted as a meeting room as well as my cube.

Looking at it over the years, I mused about its provenance, my personal ties to it, and the connection to the NRC silver ball.  Most of the time, I smiled.

But some of my colleagues and visitors took offense, seeing it as something that mocked public service and suggested we were all lazy.

I saw it differently.  In fact, at that art gallery event, I found myself using the platform and the Don Quixote allegory to vigorously defend public servants as uniquely dedicated and heroic.  While there are some who fit the image of slothful clock watchers, these types are an isolated minority. Most of the people I know are driven and work as hard as or harder than those I met during many years in private sector business. 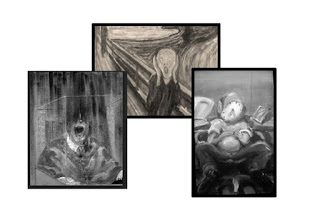 They certainly warrant respect on par with that afforded some of their harshest critics in the worlds of art and academia.  Many work long hours motivated by the aspiration of contributing to their country and something greater than themselves, and they do so often burdened and blocked by those processes that seem to exist for their own sake, by abstract and artificial requirements, and the kind of bureaucracy Rene and the other artists sought to needle.

For this reason, I looked at the painting and saw a sad character not lazy, but worn down by it all, crying out in an agony reminiscent of Edvard Munch’s The Scream.

“It is a reminder of what I do not want to become,” I told people.

In fact, many visitors noted that artistic similarities with The Scream: the smooth round face, circles within circles, smooth swirls, the mix of softness and intensity of the colours, and the theme of environment-induced grief.

Others commented further that Sleeping Beauty echoed the raw and slightly grotesque figurative paintings of the British painter Francis Bacon, who not only liked round heads and circular, screaming mouths but also put his subjects in cubes and boxes.

Seeing the clock-watching confinement of Rene’s painting in this light, we often referred to it uneasily and jokingly as “the Sparks Street Scream” and “the Cubicle Cry.” Rene later let me know in an email exchange that he preferred the original title, notwithstanding the mischievous appeal of association with Munch.

In any case, the painting’s history now includes years in a government office and the meeting room of the Secretary General of the National Research Council for a period that included NRC's 100th anniversary year 2016. That silver ball, which still shines outside M-58, was ironically designed and constructed for NRC’s 50th anniversary in 1966.

Rene’s late father dubbed the silver ball “The Universe is You” to relate to its globular shape, its capacity to reflect the sun’s rays and send bright light in all directions, and its function as a mirror reflection of the viewer. Names mean something.

The name Price is shining brightly in new ways today. One of Art Price’s other celebrated installation pieces is an aluminum and bronze collection of stylized geese called “the Welcoming Birds,” placed many decades ago at the Gander International Airport in Newfoundland.

Recently, Art Price’s “Birds” have been celebrated as emblematic of the story behind the Broadway Musical “Come from Away,” have been featured in media stories, and anchor tours of Gander inspired by the play’s success. 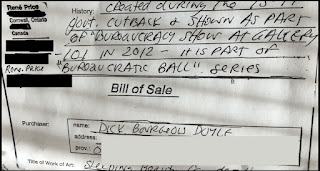 All of these fibres knit together in my mind when I look at "Sleeping Beauty."

I like the painting, yet because some people I admire take it as a personal critique, I am not, as I said above, even sure I should. 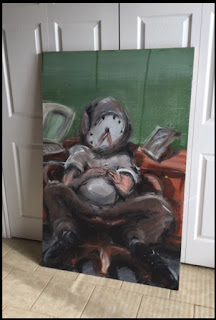 A painting that solicits different takes and raises questions probably qualifies as a desirable work of art and should be valued.  But lately I have wondered whether the painting might find a better home for the long term.

This thought has magnified in recent months as I approach retirement and leave behind the large office and bureaucrat’s work space so suitable to the painting’s shape and size.  I am not exactly sure where the painting will go, but I will keep looking.

I know just storing it my basement would be banal, bureaucratic, and a sign of giving up.