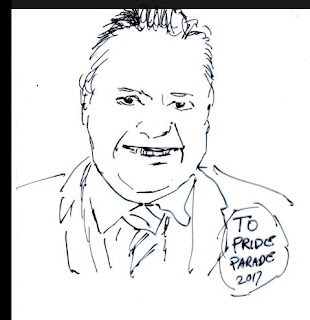 Douglas Ford Jr., a known Toronto City Councillor and active member of the  Ontario TO community, has been chosen as the new leader of the PC Party of Ontario, an electorally conservative organization with a history of Torontophobia and opposition to any extension of TO rights.

His election as party leader was announced yesterday, last night, and again today in an intentionally confusing process at a convention centre in a place that is sort of inside and sort of outside Toronto.

Some party members have yet to accept the election of an openly Torontonian leader and are contesting it.

“I really hope that the people of the Ontario PC Party do not judge their leaders on the basis of their civic orientation,” Ford said after his victory speech. “I really think that most people do not have such prejudice in their hearts, but regardless I will not deny or hide my Torontoness.”

Ford’s election marks the Party's shift to the center right side of the province after leadership from Barrie, a place just up and to the left on the map.

“Well, there was Ernie Eves who came from somewhere around Owen Sound, and Mike Harris who was persistently and painfully North Bay – like the interim leader what’s his name, and Frank Miller was a car salesman or something from the Muskokas,” said Ontario historian and registered political pundit Anna Leeste. “The Liberals have been much the same with David Peterson who was, like John Robarts, from down in London, Ontario and then there was Dalton from Ottawa."

Leeste notes that while some PC leaders and other politicians were elected to the Legislature to represent Toronto area constituencies years ago, they always downplayed their Toronto association and disavowed Toronto-ccentric policies.

“Bill Davis, you will recall, always wanted to be called Brampton Billy,” the professional pundit says. “And even though the NDP guy, Bob Rae, was elected federally and provincially from Toronto ridings, he was born and raised in Ottawa, lived and studied abroad, and always had the air of some kind of citizen of the world floating in the ether between cities and countries.”

A review of Ontario Premiers throughout history finds that most of them, such as Leslie Frost from Lindsay and farmer Mitch Hepburn, could claim strong rural roots and a begrudging willingness to spend time in Toronto just to govern the province.

Even George Drew, Ontario Premier in the 1940s, who attended Upper Canada College, went to the University of Toronto, graduated from Osgoode Hall, and represented Toronto High Park in the Legislature, managed to avoid admitting his Torontonian nature all the time he was in office.

“Drew never lost a chance to remind you that he came from Guelph and started his career as an alderman and Mayor of Guelph,” said Leeste, adding that the number of premiers in other provinces having claimed Toronto links was “something less than zero.”

Leeste acknowledged that the current Premier is also from Toronto.

"But people have found other reasons for prejudice in her case, so the Toronto thing is not as big a deal," the pundit explained.

Today's media coverage of Ford’s convention victory and campaign has largely ignored the relevance of the new Leaders’s civic orientation and avoided the specter of a Torontophobia backlash.