Full Text of President's "I have a brain" speech 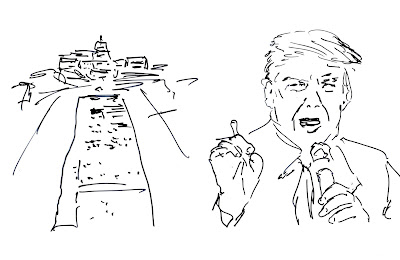 It was a privilege to fly to Washington this week in the government jet with the Minister and take a limo up to the mall to hear the President reading out tweets in the shadow of the Lincoln Memorial.  The event has already been tagged to go down in history as the "I have a brain speech."

"I am happy to join with you today in what will go down in history as the greatest – and most big demonstration of mental fitness in the history of our nation.

Five score or something like seventy years ago, I began my life with two great assets – well lotsa dad’s money – but also mental stability and being, like, really smart for a baby, which I was then – and when I wasn’t like being a very, very successful, not very bankrupt businessman - and a TV star with ratings like have never been seen before in the history of TV  – and I’m talking about hundreds of years – even before America defeated the Indians and Mexicans to make our country.

So, now we have Crooked Hillary Clinton - who went down in flames with more votes than me – and now comparing me to Ronald Reagan by not saying stuff  - whom I compare quite well with - thank you very much.

What was I saying ?

I wanna say to you today, especially all of your losers who hate me, that despite what you read in books, newspapers, my tweets, and transcripts and things, I have a brain.

It is a very fine, very, very American brain – without equal – because no one is equal to my very stable brain – or equal to my body which has my brain in it.

Did I say I have a brain today ?

So, Hillary can go back to her university, go back to Obama, go back to her crooked home in Crooked Hillary land, and forget about ever seeing my brain because it’s mine and not hers – she lost, I won. There. Proof.  See no Russian collusion – fake news, total hoax.

But they keep screaming and screaming it – it drives me crazy – I am so stable, I am stable.

But the fake news rings in my head.

God almighty how long will it last."