The Protest as a Musical - Les More-Idle-Nots 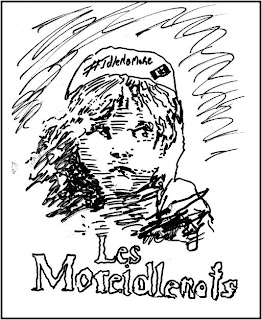 Last week, after days of watching television coverage, listening to radio debates, and reviewing Tweets, blogs, and posts on the Idle No More protests, I felt a bit sad, disheartened, and upset so I decided to take a break from all the talk about street protests, poverty, and politics - and went to the movies.


Somehow it didn’t help. In fact, during the days since seeing the movie, Idle No More and Les Miz have melded in my mind into a congealed idea that has me pretty worked up. Part of the reason for my distress was the fact that I could so easily associate early 19th century famine-era France with the plight of people living in Canada today.
But as a shallow commentator on the social condition and a blogger concerned with stuff, things, simple thoughts, and thoughts with the potential to become ideas, I was really excited by how easily I could map the Idle No More movement onto the plot of Les Misérables. Chief Spence could easily represent the valiant Fantine and her willingness to deprive herself for her daughter Cosette, who might be the children of Attawapiskat. Chief Atleo could stand in for Jean Valjean, a hero to some not to others, who has high points as an elected official, but also falls ill.


The protests in Les Misérables are intertwined with the return of the monarchy to political life giving an opening to involve the Governor General in my modern-day Misérables, and, of course, both the events of the musical and the current protest movement resort to the desperate use of barricades.


You get the idea. A Canadian revival of Les Misérables could make a lot of money with this kind of a topical spin, and some of the millions might find their way into water treatment facilities, schools, and healthcare - after the crew, the producer and his lawyers all get their cut, of course.


One issue remains. The personage to represent the suspicious, intransigent Inspector Javert, who sees the world in black and white and who blames Les Misérables for their plight.


In discussions with colleagues and friends, one name comes up often.


But I am not so sure. My list of potential Javerts is longer.


Regardless, I know that as soon as we can collectively decide who is the intransigent one and who is not, then we can get this show on the road.

Check out Satire of Machivelli's
The Prince (500th Anniversary)