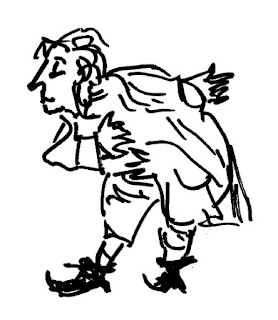 "Flatterers are to be shunned..."
Machiavelli, See The Prince


Prince Aytienno was determined to avoid the failings of his waffling and weak predecessor Prince Eytienni. The pathetic Eytienni, his insecurities, and his indecision had seeped into the Royal Court and filled it with nervous dithering. Aytienno was not only justified in cleaning house, but obligated to do so for the good of his new administration.

Topping the discharge list was The Royal Flatterer - the one known as Adulazi.


As the guards dragged Adulazi’s scrawny frame into the throne room, the new Prince shook his head in disbelief and exasperation.


“What are we going to do with you?” said the Prince. “You’re too wretched to allot scant dungeon space, and yet there is no place for your kind in the new regime.”


“Yes, you are very prudent and shrewd my Prince to spurn flatterers and their wares,” said Adulazi head bowed and shaking. “We have a toxic influence, we have no role to play in the administration of a noble principality, and we can make lesser men weak of mind.”


The Charter and Regal License that established the position of “Flatterer Royal” described the post as a senior advisor who would plan, manage, and lead in the overall provision of positive messages and words of support to the Prince and his Royal Court. The Flatterer was expected to have a background in advanced political arts and to have had experience in directing commoners and the servant classes as well as in interacting with nobility.


“It says here in the Charter that you were to align your flattering with the Prince’s strategic goals and ambitions,” said Aytienno. “ But as far as I can tell, my predecessor had none.”


“Yes, my Lord, but twas not my duty to say it,” Adulazi explained. “I and my staff were tasked with monitoring street talk and tavern debates for laudatory language and glowing references to the perceived and the anticipated.”


As the Prince studied the shadows on the wall and noted the setting sun, he began to reconsider the dungeon. But before he could utter a command, Adulazi rose with a suggestion of his own.


“Sire, you are committed to making effective the Royal resources once squandered by the inept Eytienni administration,” the Flatterer confirmed before the nodding Prince. “Why not exemplify this commitment in your first act by making constructive and productive use of my humble skills in the service of your noble vision and quest?”


“Speak your proposition, but with haste,” said the Prince.


“I could draw on my expertise to train and counsel your many faithful nobles and advisors on techniques to avoid flattery,” the Flatterer explained. “And I could act, on your behalf, as an agent to flatter and cajole admiring women, for example, when you are otherwise occupied and when the occasion demanded it.”


The Flatterer continued with increasing authority and confidence.


“Finally, I could turn the contaminating toxins of my flattering talent upon your unworthy adversaries and those who might usurp you in order to bend their minds and to disgrace them,” said the slight man in drooping tights. “It will also expose them as flawed beings prone to the seductions of the flattering act.”


The combined thoughts of cajoling women and punishing enemies seized the Prince by his wits and soul, and he stood up to shake the now Former Flatterer’s hand.


“I accept your proposition and plan for rehabilitation,” said the Prince to the beaming Adulazi. “With the added requisite that you also let it be known through your acts that I personally spurn flattering and relish the spirit-building test of defiant, public critique.”


“As you wish, my Liege,” said the once Royal Flatterer.


“So, the Royal Charter will be thus amended,” said the Prince, turning to his scribe and chief administrator. “The Flatterer’s tasks henceforth will be described as follows –


One - to counsel my nobles and advisors to pay no notice to my pronouncements and proclamations and to avoid praise and promotion of same at all costs;


Two – to cajole with sweet flattery all of my women when I am absent and unable to attend them;


Three – to praise and flatter my enemies and adversaries in all that they do in a manner that is excessive and undue;


And Four – to criticize and mock my every decree, my personal ways, and my manner of speech privately and publicly with the harshest and most humbling word combinations possible.”


“I am your servant my Prince and will obey to the best of my means,” said the Former Flatterer as he backed up and made his way to the exit.


“But if you would allow me just one last word, I would say that you are a most wise and great prince.”