(Ottawa, Canada)   In the early months of 1512, five hundred years ago this spring, foreign troops entered the City State of Florence paving the way for the Medici family’s return to power and for the removal of senior bureaucrat and political administrator NiccolÒ Machiavelli.


The following year was not a good one for the once powerful Machiavelli.  The awkwardness of his banishment was amplified by periods of imprisonment, torture, and finally the ultimate horror of sun-soaked manual labour on his farm near the Florentine suburb of Sant’ Andrea in Percussina.


Unpleasant and demoralizing.  Yet this combination gave him the time and tendency to write and reflect about his experiences in the vortex of Renaissance-era political affairs, and it led to a thoughtful and clear-eyed analysis, eventually published as the influential IL Principe or The Prince.  A treatise that shaped modern political philosophy, the Prince has fuelled the contemptuous and cynical perspective on politics ever since.


Machiavelli finished and distributed the little book in 1513 although it was not formally published until after his death in 1527.


“I am certainly not alone in thinking that Machiavelli was joking,” says Ottawa writer Dick Bourgeois-Doyle, author of IL Principio – The Principle, a new book that satirizes Machiavelli’s posture as a political operative and theorist who had it all figured out and that mocks a way of thinking still evident in policies and politics around the world. “He definitely had the skill and the motive to satirize the ignoble side of political power.”


Under the pseudonym PiccolÒ Mochiavelli (Little Mock of Machiavelli), Bourgeois-Doyle has assembled a collection of light-hearted stories that echo the Italian philosopher’s manner in a sometimes fanciful way that resonates with today’s issues and events.  His new book proposes a “unifying theory of government and politics” – The Principle – stated in a Machiavellian vernacular as “Tutto non funzionano,” a phrase that the author translates as “nothing works”.


“The Prince was written as if Machiavelli was trying to ingratiate himself with the Medici,” notes Bourgeois-Doyle while adding that there are signs that this was just a ruse to permit a satire. “It is officious, obscenely courteous, and grand flattery – yet it is wrapped around a work that counsels princes to avoid flatterers at all costs.”


Machiavelli enjoyed his greatest professional successes and periods of influence in the context of a republican government, leading some historians to suggest that the philosopher may have been trying to, indirectly and somewhat sarcastically, advocate for the republic model by documenting the brutality, immorality and dishonesty requisite in any effective and enduring principality.  Bourgeois-Doyle also points out that Machiavelli never forced the issue and never did present his work to its presumed addressee.


“He was a humorous playwright and poet and willing to satirize and ridicule authority when he felt it necessary,” says the Ottawa writer.  “His play the Mandrake was also written after his exile and is quite biting as well as funny.”


The new work, Il Principio, includes an “Other Reading” list of present-day references ranging from pension reform to gun control that seems to correlate sequentially with the themes satirized in its numbered chapters. Yet Bourgeois-Doyle only smiles and looks away when asked if this is coincidence.


Il Principio seeks ultimately to commemorate the quincentennial of the 1513 completion of the Prince, and Bourgeois-Doyle is launching it this year on Machiavelli’s birth date May 3, 2012. 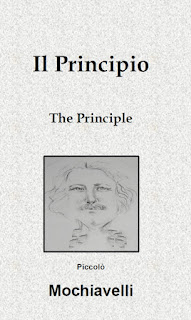