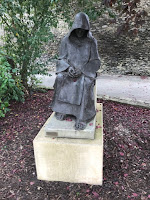 Wherever I travel in the future, I’m going to carry around a leafy celery root.  Also called celeriac, the vegetable helps you find directions, locate the best restaurants, and learn things about local history.

We used a celeriac to these ends this fall when visiting Malmesbury, one of many market towns in Wiltshire and one that actually had an active celery selling market on the day of our visit.  But we didn’t start our day there. 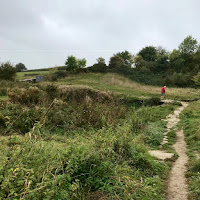 As per our routine, we began with a walk through the countryside. The Malmesbury tourism office encourages this approach with a map that not only guides you to foot paths and bridges, but also provides detailed histories of the sites along the way.

Our walk started at the Town Hall and led down to a pool of water known as Daniel’s Well.  Daniel, we were told by our map, was the Bishop of Winchester from 704 to 755.  One of those austere monks who liked to test themselves with painful experience, Daniel would stand in the streaming water at this place all night long to cool his passions. 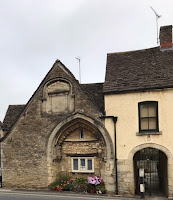 Not having any passions that I wanted to cool, I took care on the flat stones crossing the stream and headed over the fields, through the gates, and past other sites that included the Avon Mill, a condo building that had a long and semi-prosperous history as a silk mill.  Just a few steps up the street, you go by a tablet dated 1694 at St. John’s Almshouse for the poor, a building that also had a long history, but not tied to silk garments. 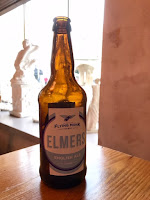 For a small town, Malmesbury foments history and links to intriguing people ranging from philosopher Thomas Hobbes to Elimer, the 11th century monk who made an early attempt at human flight sailing 500 feet on glider wings.  He broke both legs but has inspired intrepid dreamers and drinkers in the area for a thousand years.

The centerpiece of the town is the ancient Abbey which holds the effigy and remains of Athelstan, the first King to conquer and rule all of England.

All of this and more is recounted in the notes to the map and other tourist brochures.  But we also learned a lot by talking to people on the street and in the shops, and this is where the celery root comes in handy. 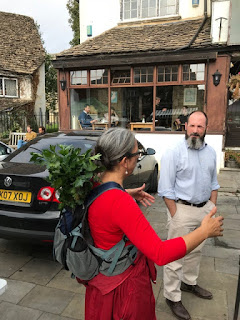 Michele had been looking for a celeriac bulb and was delighted to see a healthy-looking specimen in the Malmesbury stalls around the old Market Square where we wrapped up our walk.

It is a weird looking bit of produce: a big bulb with a long leafy stem on top.  Not wanting to carry a grocery bag for the rest of the day, she plopped the thing into her backpack.  It looked like she was carrying around a small tree and was hard to ignore, and it changed our experience of Malmesbury.

For the rest of the day, people we encountered in shops, in the market, and in the museums felt obliged to comment on the green bush growing out of my wife’s back, and this led into lively conversations about where we were from and what brought us to Malmesbury. People volunteered personal suggestions of things to see and do and places to eat.  One man told us that he was not only a Canadian but from New Brunswick and knew the area of Michele’s family roots well.  A woman in the market gave us some apples seemingly for no other reason than as a gift in return for a laugh and a chat with a woman who had the outward aspect of a giant squirrel with a green tail. 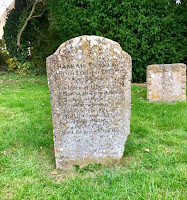 Earlier, during our walk, we had a similar exchange with a friendly, approachable couple who were keen to tell us the story of Hannah Twynnoy and to make sure we saw her tombstone in the churchyard.  According to local lore and the poem on the stone, Hannah died in 1703 as the first person to have been killed by a tiger in Britain.  She was working at a pub next to a menagerie and was, as per the  legend, prone to taunting the animal.  Evidently, the tiger's cage wasn't as strong as it could have been. 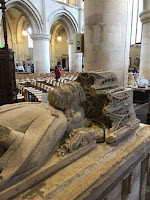 The couple described the location of her tombstone with its chipped lower right edge perfectly, and we found it though it would have been easy to miss without this guidance.

Recalling our exchanges with this couple and the other people of Malmesbury that day, I still think carrying a leafy celery root is a good idea when travelling.  But it appears that there is something else that induces friendly and helpful conversations, is easier to transport, and costs less.