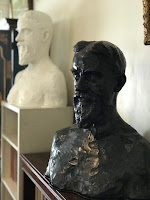 As the years pass, it gets harder and harder to identify age-appropriate role models. But one whom I thought might serve me to the end was George Bernard Shaw.

I admire witty, opinionated writers and playful personalities.  For this reason, I would find Shaw admirable even if he had never penned a popular play nor attracted accolades like the Academy Award and the Nobel Prize.  He wrote lively and provoking newspaper and magazine articles as well as mountains of thoughtful letters, and he tried to influence society directly as a sometimes politician and social activist.

His death came after falling from a partially pruned tree in his garden at Shaw’s Corner, the English country home where he kept active, both physically and intellectually, to the age of 94.

Though not far from London, the home, now a National Trust site and museum, is not particularly easy to reach.  For those without personal transport, it can take a couple of hours with several bus and train transfers culminating in a five mile walk down country lanes and across fields. 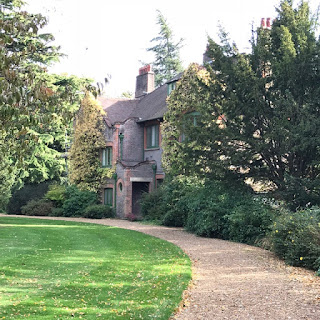 But we love the latter and were up for the former on the day before we left England, and I really couldn’t think of a better way to cap off our time in Blighty.

In plotting the day, I read more about Shaw online and found myself skimming over the admirable parts which were familiar to me and which had formed his image in my mind.   Instead, I paused on  tidbits that many would see as less than commendable.

He wrote in a soft, if not fawning way, about Hitler and Mussolini, he opposed vaccination programs, and he cast favour on the so-called science of eugenics.

I already knew that Shaw’s views were controversial during his times and beyond, and I know that we fail history when we force it under the lens of today’s knowledge and sensibilities.  But the review of his works and views caused me to struggle and search for rationalizations even before we arrived at Shaw’s Corner and began talking to the volunteer guides. 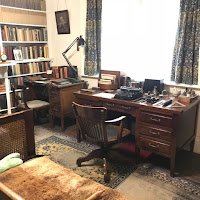 All of them were committed enthusiasts, but they still added to the inventory of qualifications on the man.  One comment that caught Michele’s attention was about the writer’s contradictory relationship with women.  An early and consistent supporter of women’s rights and suffrage, he also had an awkwardness around women including his wife  in a forty-year marriage that may not have been consummated.  Though the extent of any infidelities were in doubt, he regularly wrote racy and sometimes passionate letters to other members of the opposite sex.

“Your role model had some flaws,” said Michele.

“Yeah, some of it is kinda weird,” I said as we thanked the lady at the door for her interesting mix of Shaw stories and headed up the stairs. 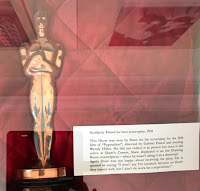 On the second floor of the house, a room brims with photos and artefacts including the Nobel Prize certificates and his oddly scruffed up Oscar.

“He used it as a doorstop,” another volunteer guide said. “It got marked up a lot.”

This made me laugh and reminded me of a photo downstairs of Shaw sitting nude, imitating his friend Rodin’s Thinker.  Both the scratched Oscar and the naked Shaw photo attested to the writer’s sense of humour and ability to see himself and his achievements lightly.  This attitude extended to his final years when he wrote a Punch and Judy-style play presenting a sometimes violent debate between his avatar and a puppet representing Shakespeare.

Outside walking along the pathways and past the statue of St. Joan, I recalled that Shaw had his ashes scattered in the dirt below my feet to mix them with those of his wife who predeceased him by seven years.  I saw their relationship, like the ground, as something more solid than those earlier stories might have suggested and began to recoup my role model view of the man. 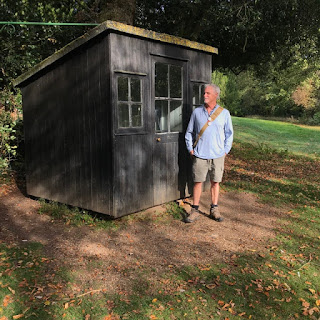 All this came together at the back of the property where a tiny wooden hut sits under the trees.  Shaw’s hut cramped with its desk and cot was a refuge where it is said he wrote most of his major works.

Nicknamed “London,” the little hut is also a physical reminder of his quirkiness and sense of humour.

“Oh, I am sorry, Mr. Shaw is in London,” unwanted visitors to the house would be told.

Again, I smiled and resolved to retain G.B.S. in my positive thoughts.  I don’t necessarily embrace his quirky views and lifestyle choices, but I admire his approach to it all.

Whether moderation on Mussolini or thinking in the nude, he always had a playful way of expressing his opinions and responding to life.

A Shaw quote that I read browsing the bookshop at the exit summed it up.  I walked away from the Shaw’s Corner with these words in my head and a better understanding of why Shaw provides someone my age with a useful model.