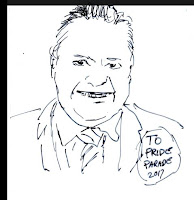 The Ontario Progressive Conservative Party has reversed the decision to keep journalists off the PC Leader’s campaign bus this spring. Party spokesperson Eddy Ologie said that instead the leader Doug Ford would be barred from the bus as a cost saving measure.


“We looked at the books and realized that we can feed a busload of journalists more easily,” Ologie added.

Experts suggest the Tories, however, are keen to control messaging ahead of the June election hope to keep Ontario journalists criss-crossing the province while Ford stays in his Toronto office watching television or checking his phone.

“Most media outlets cover events without paying attention to what the candidates do or say anyway,” said Ologie in response to the suggestion.  “This shouldn’t change things much.”