A Good Party to Come From 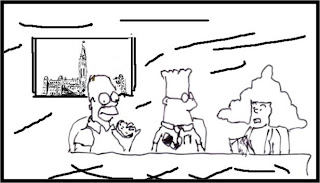 We were a minority group and outsiders for sure.

Ghettoized on the west side of the Parliamentary cafeteria, we sat each morning drinking tea from a glass and eating poppy seed cakes, segregated and visibly detached: sometimes mocked from afar and always encircled by the dark grimy cloud of prejudice.

Even the second-generation card-carrying members among us were treated as peripheral and ephemeral. The unspoken, but understood assumption was that we would be gone someday and were merely something to be tolerated provisionally because the Party needed votes.

I and the others like me were assistants to the Left-Wing Conservative MPs.

We moved in our own circle, talked about Castorian politics, and consoled each other when our spirits were low. We sought guidance from our community elders when our consciences were tortured by the tenants of the Party’s dominant wing and its orthodoxy. We did not aspire to assimilation, merely to mind our own ways and to be free to pursue our beliefs within the Party’s structure.

We never harboured takeover ambitions either, in part, because we could never identify a leader from among us. Just as very few 18th century French aristocrats voluntarily stepped up to seek the guillotine, only the most naïve of the left-leaners ever approached the microphone at full meetings of parliamentary assistants or at Party conventions.

We kept to ourselves until the fall of 1984. With the security of a majority mandate and within the ensuing euphoric ambiance, our community felt safe enough to form a special sub-committee on left-wing conservatism and engage in the intimidating search for a Chair.

“Maybe we could pay someone to do it,” suggested one wise man. “Or at the very least, we could apply for some sort of government subsidy for the Chair.”

“Should we have donuts at all our meetings or just those on Friday,” said one less wise in response. “I’d like to have cake sometimes if it doesn’t mean taking cake from the unfortunate.”

“Well, I guess someone who wants to get paid, but will use the money to make donuts and cake,” said the Sub-Committee Secretary halting the taking of minutes and looking up momentarily from her notes. “Maybe a baker.”

After determining that no members ever had been bakers or pastry makers of any kind or would ever volunteer to be one if it also meant representing our group at a Party event, a motion was tabled to disqualify ourselves from serving in the role of Left-Wing Conservative Caucus Parliamentary Assistants Ad Hoc Sub-Committee Chair.

And the inaugural and only meeting was adjourned.

Soon after, the key members of the sub-committee left Parliament Hill to work in Castoria’s federal public service, government relations consulting firms, and the head office of the National Right-Wing Interest Consortium.  Our group and, with it, the effort to extend the Party beyond ordained ideology dissolved.