Parliament Pete and The Kid 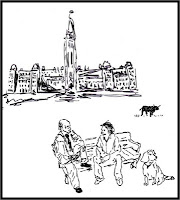 After I got a job in a Minister's Office and moved the Capital, Peter Prestonowski kept me under his right wing, guiding me through my formative years at the interface of politics and government.

Today, I am so grateful that I kept my notes from those conversations.

“Pete, there’s something I’d like to know about for sure.”


“What is she,” Pete asked, looking at me right straight and making chewin’ moves with his mouth.


“Oh, is that all,” said Pete actin’ more relaxed and comfy like. “Whatta yah need to know ?”


So Pete says “Well, Libberalls is funny all right, but I guess you could stretch a point and say they was like the rest of us.”

He crouched down and patted my dog Mr. Deefunbarker on the head as he spoke.  He leaned back on the bench and went on.


“You see, Kid, the thing you gotta know about Libberalls though is that they is fussy about a lotta things that ain’t worth a whoop,” he said squintin’ and lookin’ off over the flat grasslands into the open sky front a Parleemant Hill. “They like things all pretty and just so.”


Pete always knew what he was talkin’ about.  Yeah, them Libberalls picked their leader ‘cause people thought he was pretty and just so back then.


“Fer Libberalls it does. And clothes is real important too — clothes and being romanced,” Pete said coming very close to smilin’ hiself. “They’s like a bunch a grasshoppers climbin’ over barbed wire in a horse barn.”


I wasn’t always sure what Pete was tryin’ to say, but I knew it was for sure smart, and I wanted to hear more. But just then, my best friend Eddy Ologie yelled at me from the Parlamentree restaurant saying it was dinner time so I ran off with Mr. Deefunbarker and told Pete I would talk to him sometime again real soon.


“No rush, Kid,” he said turning back to read his copy of the Prairie Farm Review, “Things ain’t gonna change.”