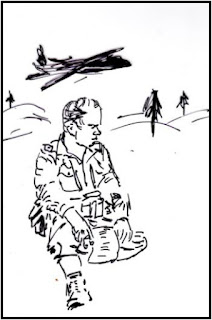 Much has been written by and about the dedication and bravery of war correspondents, the journalists who covered stories from the frontlines in World War II.  But not enough attention has been given to the work of their conflict communications comrades: people like my great-uncle Greg, a government War Zone Comm Officer. He and his colleagues were specially trained defense department communications staff charged with giving strategic communications advice to the victims of war and to soldiers heading into battle.  Now, in his twilight years, Greg feels obliged to share those stories before they are lost forever. Here is an excerpt from his draft memoir.

On a typical day during the War, I would make my rounds providing the enlisted men with recommendations for practical jokes, telling stories about officers losing their weapons, and sharing other information that would help the men develop a portfolio of humorous war-time memories for recitation in post-war Legion beer parlors.  As the War-Zone Comm Officer, I also had responsibility for assigning assigning catchy nicknames to new arrivals and for teaching the men the lyrics to risqué marching songs.


But the most rewarding times came when I was able to help the civilians in the war zone appreciate the broader significance of the events affecting them.


One such occasion came during our push up through central Italy in the summer of 1944.

The French and the Americans had been pulled out to fight on other frontiers and, with them, went their War Zone Comm Officers, leaving me with a few young Castorian bureaucrats, all just out of college with no frontline strategic comms experience.  I had to do the heavy lifting as we continued to advance and promote the strategic decisions and operational plan priorities of the campaign.

Media Lines for the Victims

The political leaders and military brass had determined that the picturesque village of Molto Triste posed an impediment to our objectives and blocked the path to the implementation of our strategy. Recognizing that this meant our troops would be advancing on the town and bringing with them a gaggle of war correspondents, I ordered the printing of thousands of leaflets with key messages and media lines that the town’s inhabitants might want to consider in the inevitable interviews and human interest story interactions to come.

A squadron of daylight bombers zoomed low over the cluster of ancient stone houses, shops, and church buildings, dropping the leaflets upon the town.  At first, I felt disheartened. Looking through my binoculars from the hill outside of town, I could see the Italian civilians leaving the carefully crafted leaflets on the ground as they ran into the fields, roads, and streams around the village. Through some prior intelligence, they knew that leaflets presaged a military advance. Still, I thought, they might have liked to have had some well-written background material to read as they fled for their lives.

Minutes later, on schedule, the bright shiny, bomb-filled planes returned to obliterate the little village. I and the other non-fighting troops jumped in our jeeps and headed into the what was left of town after the dust settled.  We saw that the only Germans left in Molto Triste were dead and buried, at least buried until the bombs unearthed their bodies.

With the war correspondent truck coming over the ridge, I strategically advised the infantry men to rebury the bodies and focus on helping the victims.  The Italians took the reburying to mean that the bombers would not be coming around again, and they rose up out of the fields and forests to go back to what was left of their little homes.

One of the villagers, who had a brother living in Castoria and could speak a little English, ran up to us.

“Hey, Ta’ronto, you bahsterr,” he said puffing alongside our jeep. “Mia Mama is in there somewhere.”

This news got the arriving war correspondents all excited, and they jumped out of their jeep and followed the desperate man into the rubble. I walked along behind.

There, in the midst of the remains, we heard a moaning sound and saw a bent, wrinkled hand moving.  With the stones pulled away, an aged woman with a sun-baked, withered face crawled out.

As I listened in, one of the hard-boiled corrrespondents asked in a choked voice if her  translator son could tell us whether the old woman was all right or not.

“She say,” he told us. “she okay. The Castorian plane boys couldn’t hurta her.”

Then, the journalists asked if she had anything she wanted to say.

The old woman mumbled and grinned. She patted her clothes for a few minutes and then from deep within the rags that covered her, she drew a crumpled sheet of paper that I recognized as my work and handed it to her son who read it out to the eager, scribbling war correspondents.
“She say,” he said reading from the speaking points pamphlet. “She thinka

1) the traditional naval-based peripheral strategy for securing the Italian Peninsula was a solid decision,

2) particularly because it was-a coupled with amphibious landings in the Mediterranean.

She also say in this paper that:

3) the decision by the Allied leadership to fight as part of a coalition in the central campaign and with exterior operations designed to gradually weaken the enemy should be applauded by citizens of all Allied countries but most particularly those in Castoria.”

A tear came to my eye as I thought of how her comments would support the implementation of the second-phase of the media relations strategy and would be highlighted in the daily clippings at Defense Headquarters back home over the following weeks.

I kissed her gnarly hand and jumped back into the jeep to head off to my next War Zone Comm Officer adventure.