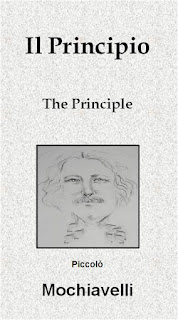 
The year 2013 will mark the 500th anniversary of the completion and first distribution of "Il Principe - The Prince", the influential and enduring treatise on politics and government written by Italian Renaissance historian and theorist Niccolò Machiavelli.

More than any other work, this little book has helped frame the modern world's perception of politics and governing as cynical and bloody minded arts, drawing satire in many formats over the centuries. There could be no better quincentennial tribute than stories that echo Machiavelli's manner and era with satire applied to today's current events and issues.
Canadian writer Dick Bourgeois-Doyle's "Il Principio - The Principle" (Stubbornbooks 2012) does that and more.  Under the pseudonym "Piccolò Mochiavelli" (Little mock of Machiavelli), he presents a collection of apocryphal tales that poke fun at the Italian philosopher as well as the messy blending of ideology, people and process that makes up governments in any time and place.

This book is the second in a satirical series that includes the tale of a quixotic government administrator:"The Most Strategic, Integrated and Aligned Servant of the Public Don Quincy de la Mangement."