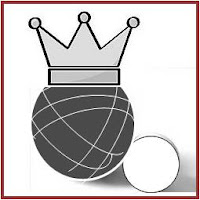 Growing up - life was tough at times.  But when he tossed the baccino, Obé would remember his father, feel good, and dream big dreams.  Playing the game became as natural as breathing the fresh mountain air around his village home.

“The boy is a miracle – he’s the King of Bocce” was a comment Obé heard throughout the years as he walked over the crushed stone courts. "He will be the first professional from our region and social class."

Prizes at local fairs and eventually patronage-supported studies in the collegio
came to Obé because of his exceptional and inspiring skill in bocce.  By graduation, he was known across the country as a rising star and the most promising thrower anywhere.

The richest bocce club in the land was the City State Americos.  Thousands came out for their games, and their fans were willing to borrow money for tickets priced at double the league norm. The club teams were also the worst in the country.

One of the reasons for the team’s poor record might have been clubhouse discord.  The Americos had many good, decent players, but also many prima donnas, party boys, and the promiscuous. This led to post-game fights and some spectacular failures on the court.

It also gave the fans lots to discuss.
The taverno and the cafés were lively and heated with debates and arguments over the personal lives of the players and their reputed bed partners. For years, the owners of the club was pleased with all this arguing and debate because it kept the teams in the public mind, the fans engaged, and the lira rolling in.

Tickets to games were sold out even when the club’s teams were losing.  The owners knew that the fans, particularly the core group of party people, would have been happy to let the situation continue forever.  But falling to the bottom of the league was a bit much, and the talk started to turn from personalities to the lack of quality in the bocce being played.

Empty seats dotted the stadium for the final games of the season.

"I don't mind losing - unless its money," one of the club owners said in summing up the post-season situation. "We need to do something."

They decided to counter the losing-money threat with a massive campaign around their new prospect  - Obé Barrista.  It was intense, unrelenting, and a bit overwhelming.  He was portrayed by the bocce club scribe as nothing short of a “Messiah, a miracle worker, and bocce god.”  He was hyped beyond all reason, but reason never did have much to do with bocce in the City State.

On the power of Obé’s promise, ticket prices were increased again for the next year.

Obé was stopped on the street and mobbed everywhere he went; every detail of his personal life was reviewed in the taverno, the market, and the villas.

Although he had nothing to hide, it was a little unsettling for those close to him. When the new bocce season began, Obé focused and tried to keep his cool.  Still, he felt the heat of the public interest on his back and the pressure of his debut in the professional league.  His playing was solid, but nothing more.

“Where’s the Saviour ?” fans yelled from all parts of the stadium.

With the security of his small bocce salary, Obé proposed to his girlfriend back in the village, and they were married that spring in a boring-to-the-City-State-public ceremony that solidified Obé’s bland reputation as a disappointing subject for gossip.
As time passed, his performance on the court picked up and was quite good for a rookie.  One of the top five players in the league, he was named the most impressive boccino tosser in his division.  Despite the uninspiring efforts of his clubmates, the City State Americos teams rose through the standings and one almost won the overall championship on the back of Obé’s consistent playing.
"But it was not miraculous, phenomenal, or amazing enough," said many of the fans.
Crops failed that year, and horse racing came to town.  These and other forces worked to drive dollars away from the sale of tickets for the City State Americos’ games.

Fans were particularly bitter because he had given them reason to believe the Americos could go all the way and had raised hopes by bringing a team into the championship only to be defeated. The public reaction was tough and critical even though Obé’s contract was the lowest amount paid to a rookie in over a decade.   Demands, vicious and personal, for the Americos to trade him could be heard throughout City State.

The owners of the club knew that their moderate success on the court ran directly back to Obé’s steady throwing.  They knew what they had to do.

Before the season tickets went on sale the next spring, they announced that Obé was being sent  away to be replaced by another player, Rico Newtoni, a man who was getting on in years and had been experiencing a bit of a slump as a player.

But there was good news for City State too –  Newtoni was an argumentative fighter, popular with the party people, and currently dating a lady of the evening !