Mochiavelli Satire - The Measure of a King


The Measure of a King 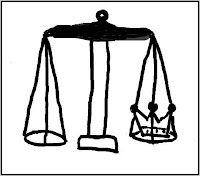 The King of the island nation of Siocco loved to read history books.  He saw himself as the spiritual descendant of the great leaders of the past and was inclined to fill his days replicating the battlefield adventures of antiquity in his mind.
“Maybe, I should invade Gaul like Caesar did,” he thought.  “Or maybe I should get Gaul to invade me.”
Although few of his subjects would rule it a happy day when the King's reading turned to ancient Egypt, his interest in the Land of the Pharaohs may have saved more innocents than it eventually cost. The King became fascinated, impressed and obsessed upon learning that standard measurement originated with the length of a powerful Egyptian ruler’s forearm.  The King discarded wishes for war and resolved instead to have some Sioccoan measure based on his body.
“I will be remembered as great as the greatest of history,” he said to himself.  “But without all the stabbing, beating and blood.”
The King charged his chief administrator with implementing the decree and with determining which measure to draw from the body royal.
“Yes, your Highness,” the bureaucrat and adviser sighed. “With pleasure.”
The administrator loathed any task that involved touching the King’s body.  He thus concluded that the best measure would be one of mass as it could be established by having the King climb by himself into a balance scale bowl, which His Highness did with glee.   A counter weight pile of sand was placed in the bowl opposite and was in turn divided in half, and then half again, and again and again.
It was thus that Siocco’s new measurement system became one defined by measures in 1/16ths, to be known as the “monarch” measurement system.  Replacing the awkward and puzzling old system of tens, it deemed that what was once 10 was now 16, and 100 became 160.
The innkeeper and the wagon maker, seeking the King’s favour, organized business interests to promote the monarch measurement system and were the first to adopt it.   The administrator hired staff and established teams to make 1/16th replicas of the King, to paint information posters, to craft works of art celebrating the transformation to monarch measurement, and to hunt down citizens storing grain and other goods measured in tens.
The transition to the new measurement system caused an air of intense activity, action, and commotion throughout the Island of Siocco, and the King felt the spread of his history-making influence.
“Siocco has never been more vibrant and industrious,” many citizens noted, often adding that “the King is truly a great man of the ages having induced such activity and convolution.”
However, despite their initial enthusiasm, the innkeeper and wagon maker had to admit that not all was good with the new system.
Sioccoan citizens who once knew their weight to be close to 100 or 200 were now told they surpassed 160 and 320. They shunned the food and drink of the inn and spent more time walking and working off their metrological weight gains.
At the same time, farmers and merchants learned that their old wagons could now carry 160 instead of just 100 and became less inclined to upgrade or replace. The wagon maker went out of business and soon found himself a begger in the town square, sharing the church steps with the former innkeeper.
The problems affected other merchants and citizens, and pressure for the King to act reached a crescendo when Siocco’s utmost trading friend, the Nation of Bux, stopped buying goods from the smaller country because of its odd system of measure.
“I want you to know that I recognize the problems with the transition,” the King told an angry crowd from the Palace balcony.  “It is communications - and the need to better explain the merits of monarch measure.”

The King increased the funds for information posters and celebratory works of art, and he announced that he and his most senior Royal advisors would undertake an international tour to promote and placate the major trading principalities abroad.  He left his teenaged son, Prince Brazzo, in charge.
“Plutzo !” the insolent young royal said under his breath as the King’s ship sailed off.
The Prince did not know that that was to be the last he would ever see of his father. The dockyard crews supplying the ship with food and armaments, being of foreign birth, mixed sixteens for tens and tens for sixteens.   The royal ship ran out of food, water, and the devices to fight off the corsairs, and it was lost at sea.
The Prince was chagrined by news of his father’s passing.
“The man was an idiot and deserved his fate,” said the Prince preparing for his coronation and assumption of the throne. “That measurement system was the stupidest thing ever conceived and must be changed.”
As the chief administrator and other advisors nodded and heaved with relief, the young monarch-in-waiting added “It so should’ve been based on my weight not his.”
Buy the E-book