Mochiavelli Satire - Caring for the Dead

Caring for the Dead 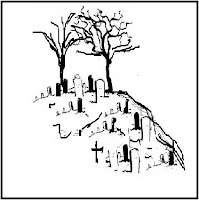 Warnecchio the Undertaker, a miserable, wretched man, scorned the town folk as irritating dolts and avoided all contact of the sociable kind.

They brought him pleasure only when he counted money after putting another one in the ground or when he ruminated about their “unbounded stupidity” with his minion, Chioné the grave digger.
Warnecchio had had occasion to embalm and bury more and more of the townspeople in recent years because the local population was growing older.  When the town was first built, the founding families produced an exceptional wave of babies in the atmosphere of optimism and opportunity.  Now, the air was less hopeful, and those babies were old and dying.
“Soon, there will be many more dead than living in this place,” the gloomy undertaker sniffed. “There will be great problems – and no one sees this - but me.”
The aging population was a distress for Warnecchio, who considered himself the true custodian of the hilltop municipal graveyard. It was filling up with dead bodies. He could foresee the day when there would be no room left for more graves and his financial security would be threatened.  He came to resent the dead and their smug sense of “entitlement.”
“They want their grass cut, their pathways shoveled, and their stones repaired,” he mumbled. “Yet they work no more, they pay no fee and contribute nothing.”
As the sole undertaker in the town, Warnecchio could demand, and always did, whatever price the bereaved would bear.  But with space in the graveyard limited, he could now see the end of  prosperous times coming unless action was taken, and he knew that the “dimwits” in the town would never deal with the issue without his direction.
“They are dolts, stupid dolts, sir, har, har,” Chioné chortled.  The grave digger found it hard to think and talk at the same time and was inclined to simply repeat his master’s utterances. This served to reinforce and amplify Warnecchio’s bias, bizarre thoughts, and resolve.
Although the graveyard belonged to the town and Warnecchio was of the minority view in most issues, he wielded mysterious authority over the hilltop land because of his cold demeanor and calm detachment in the face of death and the dead.  By this power, he confronted the Village Council with a demand that restrictions be placed on access to the graveyard henceforth.
“We have to let the dead know that their privileged place has its limits,” Warnecchio said pounding his fist on the meeting room table. “They have to lower their expectations.”
The Mayor and his Councilors nodded their heads instinctively at any call for limited expectations and bade the man in the black top hat continue.
“Beginning with the first thaw of the spring, dead wanting to occupy the town graveyard will be limited in weight to 50 pounds each,” Warnecchio proposed. “They can themselves choose which limbs, organs, and sinew should be buried and which should not – it is none of my matter.”
In response to questions, Warnecchio said that he and Chioné would assume the onus of enforcement and expect nothing more than their usual fees. As a gesture to seal the proposition, he presented figures on demography and a hand-drawn chart of the graveyard  showing how many more graves could be accommodated under his plan compared to the calamitous path the town was currently following.
“But what of the other parts and pounds ?” asked one of the older councilors. “What will be done with them ?”
Warnecchio did not answer, but rather narrowed his eyes, turned, and gazed out the window to the buzzard-filled skies about the town dump.  The Council members shook in disgust and shouted at the undertaker with the Mayor finally ordering him to leave the room.
“Well, I suppose you have other options,” he said rising to leave. “You could keep and care for your dead in the cellars of your own homes - or you could expand the public space with more land – and more – vote-losing Taxes !!”
The Special Town Council By-law passed that day - “Limitations on Interments and Use of Municipal Lands” – did not provide many details on its regulations, leaving the matter instead in the hands of the newly deputized Town Gravesite Commissioner, R.I. P. Warnecchio.
As the years passed, the townspeople adjusted to the regular sight of severed limbs, heads and organs heading for the dump in Warnecchio’s wagon. They grew numb to the gruesome and became less and less sensitive to the interests of their dead.  This made it seem quite natural when some people began leaving their dead on the side of the street, skipping entirely the process of dismemberment and partial interment.
The decaying bodies drew little notice at first, but soon foul odors, disease and vermin invaded the town driving up the cost of public health, putting pressure on pest control, and laying to rest all forms of business. The Town budget was strained from lack of revenue and unfettered needs.  Warnecchio and Chioné grew desperate as more and more people eschewed their services and chose to simply dump their dead on the streets.
At the same time, the rotting faces of former friends and family compelled the living - even the undertaker - to contemplate their own post-life plans and how they hoped to be treated when they could work and live no more.
In all this, the always calculating Warnecchio saw opportunity.  He ran for municipal office campaigning to clean up the mess by raising the mill rate and expanding the town graveyard.
“If elected, I will enhance it with green gardens and ornamentation that will attract the dead and make them feel welcome again,” he said in his election rally meetings.
He won.  But it was too late.  The Town had fallen into bankruptcy and was forced to sell the graveyard lands for funds needed to expand the dump.