Last month, a post on this blog explored something we labeled the "Death Date Paradox."  It noted that two influential Canadian engineers (whose lives were oddly intertwined through having biographies written by the same person - me) had coincidentally passed away on the same day of the year.  This was very interesting to at least one person - me.


This week, it is perhaps even more fitting to make reference to a particular "Birth Date Paradox" - on steroids.  Most of us know that the probability of finding two individuals who share the same birth date in a room full of people are surprisingly good. Even given this idiosyncrasy of stats and math - surely, the odds of the two preeminent figures in Canadian science and creativity having both been born on Christmas Day must astronomical.

Particularly when you consider that both have strong links to things - astronomical. 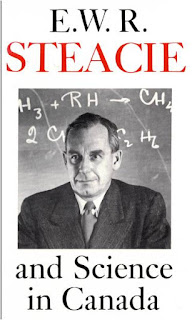 Yet this was the case for most of the 20th century.  One of the men was the great Nobel Laureate Gerhard Herzberg, who was born on Christmas Day 1904 in Germany and who was featured in an earlier blog post.

The other was the man who had the wit and position to bring Herzberg back to Canada, Ned Steacie, born December 25th 1900. Steacie’s bio is nicely summed up in this website on a prestigious research prize named in his honour.  It probably adequate to say here that Steacie was an accomplished researcher and scientist, but also a very skilled and innovative science manager and leader.  He was a visionary Vice-President and ultimately a President of the National Research Council of Canada and the first Canadian to head the International Council of Scientific Unions –now the International Council for Science.

At NRC, Steacie championed the post-war development of Canadian university research, established the remarkable NRC Industrial Research Assistance Program, and brought the best brains from around the world to Canada through innovative post-doc research inducements and a willingness to do whatever it takes to get the job done.  One example was his recruitment of Herzberg.
It is not an overstatement to say that Steacie took a chance, broke the rules, and went out on a limb – writing personally to Herzberg – who was working in the U.S. at the time - offering him a position at NRC where he would “have complete freedom to do what you wished” and where “anything you wanted in the way of equipment could be obtained” – if he would only come to Canada and help our country build its national capacity for science and innovation.

Anyone who has been brushed by the present-day civil service hiring processes will be wonderstruck by this possibility.


Herzberg did, of course, come to Canada - taking a chance himself.  He and Steacie changed Canadian science and Canada for the better, and many would suggest we are still coasting on the fumes of their energy and ideas.

So, this Christmas, if - after celebrating that other baby - you find time, please toast the two other Christmas babies - who helped make a country a better place through their creativity, dedication, and daring.