The Future and Why I can't avoid it !


The Future And Why We Should Avoid It:
Killer Robots, the Apocalypse and Other Topics of Mild Concern 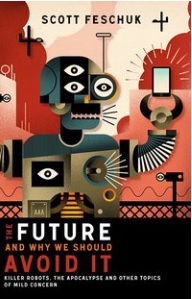 June 2015 - Scott Feschuk is awarded the Leacock Memorial Medal for Humour, and my status as a pretend humour scholar takes a whack.


Or … Scott Feschuk is not awarded the 2015 Leacock Memorial Medal for Humour --- and my humour-book-reviewer aspirations are permanently laid to rest.


Either the way, my future looks ugly.


In the closing pages of My book (not out til January) on the Leacock Medal winners, I muse that the award might be settling into a niche honouring subtle, slowly developed literary humour – the kind you find in the novels and memoir-style works that have won the prize in recent years.


There's definitely a place for this stuff and merit in encouraging literary humour in a world awash with knee-jerk Tweets, Youtube flatulence, and lightly edited blogs like this one.  But, fortunately, in advocating future criteria for the Leacock Medal, I gave myself an out by saying that the best material is a blend of funny and bookish and that, in the end, funny should be the trump card.


Unless there’s some uncelebrated, witty Canadian who can’t figure out how to click a mouse and e-publish in some format, Feschuk, the popular Maclean's magazine columnist, has to be our country’s most-persistently entertaining and relevant humorist.

﻿
﻿He is a big reason I still pass over cover photos of the Kardashians and buy the magazine at the checkout. If this was the future, I would pick Feschuk to be our standard bearer and tribute in The Humour Games.

Feschuk has other books and will certainly cough out more (in the future), but his latest, The Future And Why We Should Avoid It: Killer Robots, the Apocalypse and Other Topics of Mild Concern, gives the Leacock Associates a great opportunity to associate themselves with Feschuk.

Launched last month in an Ottawa bar filled with old journalists, political hacks, male a cappella singers, and me, the book is a collection of essays that would easily fit into a Maclean’s magazine columns and some of them have. This means that the book will not disappoint his humour-column fans.The upper crust of the CanLit class might sniff at the book’s format, but I think Feschuk achieves something admirable when knitting his rapid-fire jokes into a whole that approaches coherency and adds up to something – a commentary on the latest-gadget techno-craziness that now frames almost everything we do, imagine, and, sigh, value. His book falters only when it deviates from the theme.

﻿
In Feschuk’s future, the pervasive and diverting features of laptops, iPads, and dumber and dumber smart phones are amplified by dancing robots and potential Apple products like the iToaster - and the iCouch that lets you to Buttpoke Facebook.

"It comes down to this 21st-century maxim: If something can be made with technology, it must be made - whether we want it or not," Feschuk says in summary.

While The Future and Why We Should Avoid It might not sit comfortably on the shelf with novel-style fiction like Practical Jean and The Sisters Brothers, it would not be out of place if you step back and look at the whole Leacock Medal library.Lots of humour columnists with a similar satirical streak have won the award in the past.

Pierre Berton, another writer with Maclean's credentials, was topical, biting, and very, very funny in columns that underpinned his 1960 medal winner Just Add Water and Stir. That book cogitates, like Feschuk’s new one, about recipes in the modern world, new forms of media, and the consequences of political group think. Some readers might not fully appreciate in-jokes aimed at political junkies and journalists. But as wannabe journalist and old hack, I like that stuff. 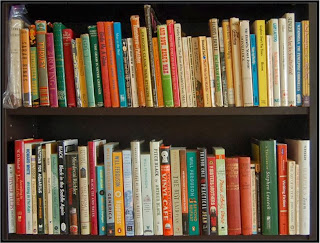 Another writer, the then Hamilton Spectator columnist John Levesque, who won the Leacock award in 1993 for Waiting for Aquarius, presaged Feschuk’s frustrations with the lifespan of latest gadgets in another book, one that I found even funnier than Levesque's first, Stranded on the Information Highway.

But, for me, Scott Feschuk’s writing really echoes the work of the now departed Richard J. Needham. The Globe and Mail columnist and winner of the 1967 medal wrote in a rampaging, rancorous way that is not exactly the style of the prospective 2015 Leacock Medalist.  But Needham and Feschuk share an uncommon ability to string absurdities and funny sentences together back-to-back in a way that makes you laugh and laugh and laugh. (The Future's pieces on vacations and airline travel are examples).

Despite my conjectures about literary humour, this other skill has to be worthy of celebrating with our country’s recognized recognition for humour writing.

So, I predict that Scott Feschuk will or will not receive the 2015 Leacock Medal for Humour, knowing that if he does win, his success will throw the intellectual merits of my new book in doubt.  Of course, if he loses, this blog will be an embarrassment.

Either way the future will be awkward --- There’s no avoiding it.