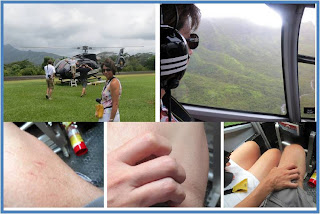 She actually drew blood.  As her hand pulled away from my thigh, I saw five little crescents.  Three were purplish blue.  Two red and wet.


My wife had been clenching my leg with her coiled fingers for over half an hour - most of the helicopter ride across, over, and around Kauai, the rugged, rural, and stunning island on the northern end of the Hawaiian archipelago.
At first, I thought her grasp was cute and took a photo, thinking she was holding on to my leg with a mix of affection and roller coaster excitement.   That was when I was looking down at her hand.  Her face told me something different.   It held the familiar stare of a stern determination not to vomit in public.


My wife is prone to motion sickness, and for some reason, we both are prone to forgetting about it at times.  This time, we were in the air with no escape.   We shared the bumping, bubble enclosure with four innocent bysitters and the affable, oblivious Sunshine Helicopters pilot. He had been talking and joking from the time he lifted off from the Princeville Airport and headed west heaving and hurling up and over the hillsides and into the mountains unaware of the churning and heaving time bomb in the backseat. 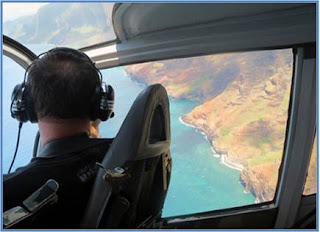 She looked away, and I tried to calculate the number of minutes and seconds it would be until we landed and her ordeal would be over.   But it was hard to concentrate on numbers and consistently empathize.

My mind flashed back to the 1962 Lindsay Ontario Agricultural Fair where I spent a traumatic ten minutes inside the nose of an amusement park ride called the Salt and Pepper Shaker.  I was accompanied by my cousin and the mushed hot dogs, compacted candy floss, and warm milkshake that had earlier been inside his stomach.

It was also hard to concentrate because it was just so damn beautiful out the helicopter window.

If Waikiki is “paved paradise,” Kauai is paradise with the pavement peeled off.   With only 50 or 60 thousand full time residents on the entire island, it seems, in spots, almost deserted when compared to the millions of tourists and residents surfing and swirling around Honolulu.

It is possible to find empty beaches not far from the main roads in Kauai, hiking trails running into wilderness, and swaths of rolling hills and mountains that are essentially inaccessible even by foot. 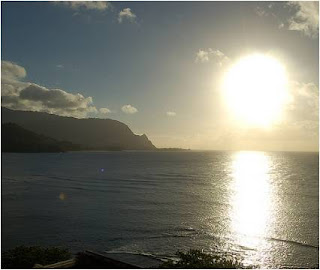 There are cottages and condos and luxury resorts like the St. Regis Resort where sunsets stab you in the heart and the waiter lifts the cork off your bottle with sword.  We ate there once, but stayed at a place down the road.

To experience Kauai, tourists are urged to indulge in the surf and to hike into the green and onto the sea-facing cliffs.  There are many options.   We took some short, but memorable hikes like the one down to the Queen’s Baths, potholes in the lava that fill with seawater and are deep enough for diving and swimming. 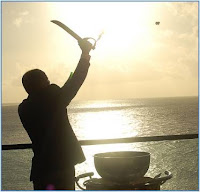 But the classic hike is the one that starts at the end of the road near Ke’e Beach.  This is  the head of the Kalalau trail which runs along the incredible Na Pali Coast.  Taking this hike was at the top of our agenda when we planned our trip to Kauai, but Mother Nature had an agenda of her own – Hurricane, then Tropical Storm, Flossie, which dominated the news during the first days of our time on the Garden Isle.  Flossie was weaker than expected when it hit and manifested mostly in rain, not wind in the area we were staying.  Still, it caused us to change our plans. 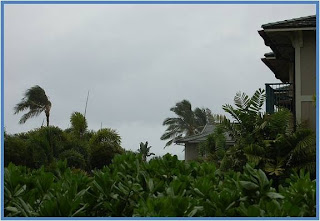 “That would not be a wise thing to do,” the Lifeguard at Tunnels Beach said when we asked directions to the trailhead. “The runoff is fierce up there right now, and you’re really supposed to have permits to go as far as you want.” 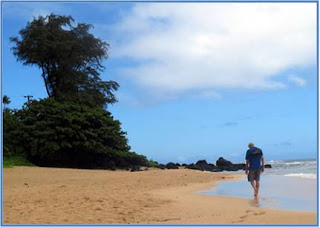 I am not always bound by what is wise, but on the north coast of Kauai, unwise choices involve falling off cliffs, drowning, and shark attacks. Tunnels is the stretch of sand famous for the collaboration between a tiger shark and young Bethany Hamilton that made her a one-armed champion surfer.

We opted for the seemingly wise, but kind of pricey alternative: booking seats on the  helicopter tour with Sunshine. Close to $500 with taxes for the two of us.  Souvenirs and a DVD video of your own flight can take more of your money. And tips are not declined. A bit expensive for what would turn out to be a bit of Hell for half of us.

For me, the flight was a guilty pleasure.   Around the lush green of Mount Waialeale, called the wettest spot on earth, up Waimea Canyon, even  into a dormant volcano, and then along the dramatic and surprisingly varied Na Pali Coast.

It’s no wonder this place is a favourite back drop to Hollywood movies ranging from South Pacific to Raiders of the Lost Ark.  Many scenes from Jurassic Park were shot along our flight path including the opening and closing at what is now known, not suprisingly, as Jurassic Falls.

“We gotta lot of plate tectonics happenin’ out here,” the pilot says to assure us that he focused on aviation and not geology in his training.


Finally, as we passed over the taro-filled fields of the Hanalei Valley, I spotted the airport where our flight into nausea began and started to think my wife would be able to hold on and hold in her lunch.


She survived the flight with her dignity and stomach contents intact.


Had the trip ended otherwise, I would not be sharing this story.
﻿
﻿
﻿

The other day back in Ottawa, we pulled out the DVD of our Kauai flight to watch it in the stable comfort of our living room.   It was great to have a way of showing my wife things that  she was unable to see when she was fighting nausea with closed eyes.  She got nauseous again and couldn’t watch the video.


“If we ever go back there, maybe we could ask for a seat in the front of the helicopter so you could stare at the horizon to settle your stomach,” I said. “And we could get some chewing gum and maybe you could suck on a ginger root during the flight.”


She looked at me with cork-popping sabers in her eyes.


“I’d rather the mudslides and sharks.”


The idea of putting the DVD in the basement, never mentioning the flight again, and telling people in the future that the mark on my leg was left by a tiger shark.