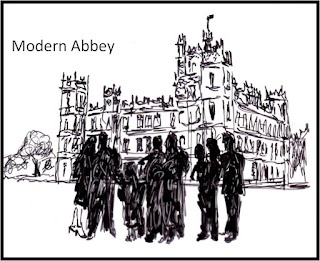 In an effort to exploit the popularity of both the British period drama and American situation comedy, the producers of the Downton Abbey and the ABC-TV program Modern Family are combining their resources to produce a television series that integrates the best of both programs.


Set in Britain at a Yorkshire Country Estate, the new program “Modern Abbey” will use the framework of the British program with some character changes to strengthen the appeal to U.S. and international audiences as follows.

Lady Gloria Crawley (née Delgado) is the foreign born wife of Lord Grantham. She was raised in a small mountain village in Columbia which has few claims to fame save its reputation as the murder capital of the region and a centre for prostitution. This raises eyebrows from time to time whenever evening diner talk turns to gun violence and illicit sex. Lady Grantham is a very loving partner to Lord Grantham despite their age and their cultural differences. In tune with the early 20th century British context, her voluptuous figure and dark beauty are never acknowledged, remarked upon, or noticed by the staff or any other characters in the show. She adds colour to dialogue at Modern Abbey with her thick accent, which sometimes leads her to mispronounce words such as “England” as “Thingland” and “Earl” as “Hurl.”

Cameronet Crawley is Lord Grantham’s mother and the Dowager of the estate. She is a baronet and the matriarch of the Modern Abbey. She has a very big dramatic, bubbly outgoing personality that provides a foil to some of the more uptight characters on the program. The Countess grew up on a farming estate, and this is referenced many times in the series. She is a fan of football and plays the drums. Her tremendous wealth and leisure time allow her to cultivate many unusual hobbies such as collecting antique fountain pens, Japanese flower arrangement, and working part-time at children’s birthday parties as a clown known as "Grantho."

Lady Mitchelle Crawley is the eldest daughter of Lord and the first Lady Grantham. Early on, she is portrayed as a petulant, uptight, and cold young woman, but as the series progresses, she shows more vulnerability and compassion. One of her most constant traits is her unfailing devotion to the Dowager, Cameronet, although they are often seen as exact opposites. She was a figure skater in her youth and is particularly inept with power tools.

Claire O'Brien, who is mainly known as Miss O'Brien, is Lady Grantham's personal maid. She was once a wild-child who made a lot of mistakes over the years, and she is fearful that the Grantham family, especially the ladies, will make the same mistakes. She is often exhausted from stress. Claire O’Brien is a perfectionist, terrible at giving gifts, and envious of Countess Gloria, not for her money, but for her voluptuous figure. She is very strict about a clean house and always frustrated because the Granthams don’t seek her parenting advice. Her favourite holiday is Halloween.

Mr. Dunphy Crowley is the son of Mr. Frank Dunphy, a shoe salesman, and Mrs. Isobel Dunphy, a dog groomer. He is Lord Grantham's fifth cousin, once removed, and worked as a qualified realtor in Manchester. After the immediate heirs perish on the Titanic and in the Great War, the family lawyer discovers that Dunphy is the next closest male relative and Lord Grantham invites him to move to Downton Abbey and become part of the local community.  Dunphy eventually agrees, on the condition that he continue to work selling real estate. His arrival is initially met with skepticism from the rest of the family and servants, especially the Countess, as he was a middle class property merchant.

But as the new male heir presumptive, he strives to fit in and find a place in the family as what he calls “The Cool Crawley.”

The rest of the characters remain essentially the same, but are presented as a mix of children, grandchildren, stepchildren, cousins, half-brothers, former spouses, and staff. All have difficulty in relationships flowing varyingly from too much independence, irresponsibility, too little confidence, manipulation, lack of common sense, and anxiety management issues.

Unlike the American forerunner, Modern Abbey does not feature any gay relationships. However, all heterosexual male characters will behave in a stereotypical effeminate manner throughout the series.

Check out this Satire of Machivelli's
The Prince (500th Anniversary)