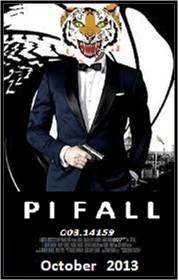 Sony Pictures and MGM have announced that they are collaborating with Canadian author Yan Martel to bring his celebrated novel The Life of Pi to a wider audience in PI FALL, the 24th installment of the James Bond film series.

On board an ocean liner crossing the Atlantic, Agent 003.14159 gives chase to “the Hyena,” a particularly malevolent mercenary who has inside information and poses a threat to the loose network of M16 operatives in India known as the Zoo. The two men confront each other on the deck. Agent PI is wounded in the shoulder, falls overboard and goes missing below the waves. Hyena snickers “PI Fall, PI Fall,” as he watches his nemesis plunge into the water.

Just as PI begins to envision early retirement, peace and meditation under the cloak of his presumed death, he is pulled from the water by Agent Z, the Zebra, who has been following the ocean liner and PI at the behest of M, the head of M16. Back at headquarters, PI is subjected to a series of deep psychological examinations that eventually wear him down and convince him to return to the field and stop the Hyena.

Agent PI, still recovering from the head trauma of the PI Fall, devises an ill-considered plan to trap the Hyena by using M and Z as bait. Confident in their top agent, M and Z accompany PI to the PI family estate in Pondicherry. With no armaments and only a swimming pool as a booby trap defense, the trio is soon overpowered by the evil Hyena and his henchmen. Z is killed immediately; M dies slowly of her wounds gasping that she is Agent PI’s birth mother as her last breath.

Distraught and filled with remorse, PI faces the Hyena’s gun and the inevitability of his own execution. Suddenly, a growl in the bushes causes a diversion, and the Hyena and his men are shot and killed by fierce machine gun fire.

As the smoke clears, Richard Parker, a friend and fellow agent code named Le Tigre, steps forward to shake PI’s hand. Parker makes an odd, taunting comment about M’s death that prompts PI to suspect his friend may be a double agent and may have killed the Hyena to cover up the evidence. But before he can confront Parker, Le Tigre disappears into the forest.

Moments later M16 agents secure the area and take PI into custody. The movie ends with PI’s interrogation in M16’s underground offices in Britain. PI recounts the troubling psychological implications of his story in detail, his personal guilt over M’s death, and his suspicions about Richard Parker’s dual nature.

The interrogation team is confused to the extreme, and PI is not believed. The M16 senior staff recommend that the matter be pursued through “extraordinary rendition” to PI’s native region in Asia.

With this threat, PI changes his story; he tells is interrogators to

“forget all that psychology and spiritual stuff. What really happened was this sniper shot me on the boat, and then there was this helicopter gunship and a secret tunnel. There were gas canisters and incendiary grenades. And a car chase, yeah, a lots of explosions, and girls. Yeah, two of them. One good and one bad. And I slept with them both. Ha ! And they both died, and then, like I wiped out everyone with dynamite and made the helicopter crash and explode.
Did I mention the women ? and the car ?”