A Politician's History of Hockey 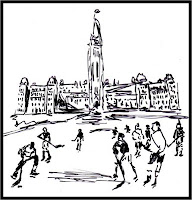 I am writing a history of hockey.

I am not really a professional historian
and not very athletic.
But I think I can add something special to
the collective of hockey-history writing
by drawing upon my years in government
briefing-note service and my past
as a political speech writer for the Prime Minister.

Here is the first draft my historic hockey manuscript.

The History of Hockey

Ladies and gentlemen, today in this book, I am pleased to announce my History of Hockey. It is a history of sports-related employment, growth and individual wealth and a proud nation’s contribution to international ice entertainment and business.

Indeed, we in Castoria are the envy of other Western skating countries, and if my history was to record the future as well as the past, it would map out continued long-term puck prosperity for all of our citizens.

From the University Hockey Club and the Triple A’s, hockey or I might say “hoquet” has drawn from roots in our great bandy, bilingual, bicultural traditions.

But we are, of course, most indebted to the ancestors of Her Majesty Queen of Canada, for having appointed our revered trophy-giving Governor General.

Before I elaborate on the history of our national frozen sport, I want to say I am fully aware of the profound responsibility I have in writing this book and my obligation to serve the television-viewing public interest on behalf of all and to support their hopes of seeing their children playing and prospering in an expansion franchise in Las Vegas.

In the months since I began writing and researching this hockey subject, I have had the privilege of meeting with hockey-loving Castorians in their communities from coast to coast, and I want to share with you something of what I have learned about hockey history in my travels across this remarkable rink and pond-covered country of ours.

I have learned that, regardless of age or affiliation, all of us want to help create a better future and history for hockey. Each of us aspires to play or at least watch hockey in a country where everyone can succeed and contribute, where excellence and opportunity coexist and everyone’s team is a winner.  Like when we won both men's and women's hockey gold at the Olympics. (Click to observe fellow Canadians making hockey history).

I have met with Castorians from all walks of life and discovered this common ice surface on our common ground.

But I believe that in order to achieve our vision, we must work together to support families and children with skates and pads, to reinforce learning and innovation in hockey camps, and to encourage philanthropy and volunteerism as coaches, referees, and hockey moms.

As we celebrate the 152th anniversary of Confederation and something like the 144th or 139th anniversary of hockey, and I invite all of our citizens to imagine ways to build a smarter, more caring national sport as we approach this wonderful set of semi-historic milestones under the National Hockey Action Plan.