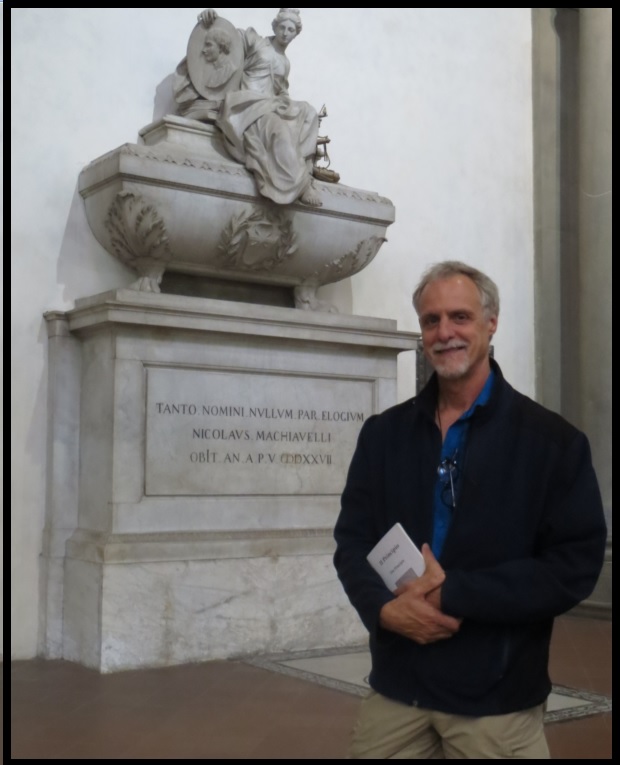 “Just because you can do something is not a reason to do it.”


This might be a good way to summarize the issues raised by Niccolò Machiavelli’s The Prince, and it’s not a bad way to judge the launch of my parody Il Principio – The Principle – in 2013 to mark the 500th anniversary of the classic treatise on politics.


Machiavelli’s dissertation describes cold-blooded, sometimes brutal political tactics that served some practitioners well, but haunt those of us who have sought careers in politics and government.   More than any other work, this little book has darkened our already dark trade.


In 2013, special events were staged around the world to commemorate the quincentennial of The Prince. They included many lectures, symposia and other serious gatherings of serious people.


Me. I thought the best way to mark the anniversary would be to make a joke. I wanted to disrupt the prevailing views on The Prince and all that this has wrought.


Thousands of learned papers and books as diverse as Machiavelli on Management and Machiavelli for Moms have celebrated The Prince and explored its author’s inner thoughts. Some see The Prince as an obsequious plea for a job; others brand it dismissively as an evil, immoral manual for tyrants; and still others regard it as a considered and honest account of the violence and deceit requisite in politics in any age.
Wide acceptance of this latter view drives me nuts because it buttresses “ends justify the means” tactics like waterboarding, wiretapping, and flaming attacks on honest, well-intentioned bloggers like me.

Why some people read The Prince as satire


But there is another way of looking at The Prince. Amid all the history, philosophy, and theory, the take that I find the most convincing is the one that sees the book as a satire. I believe that Machiavelli was, in a sense, just joking.
The evidence to support reading the book this way includes the following.

·         The Prince was written by Machiavelli after the Medici family had returned to power and cleaned house, treating the once powerful bureaucrat with the joys of imprisonment, torture, and finally banishment to his farm near Sant’ Andrea in Percussina.  Think about it.  Would you be moved by these circumstances to praise and counsel or mock and abuse ?

·         The Prince, read literally, seems like an effort to regain favour and support the Medici entreprise with hard-nosed counsel on how to run their regime in a principality-like way.  But all of Machivelli’s prior career and his other works advanced the quasi-democratic wonders of a republic not a principality.

·         In his more thorough study, Discourses on Livy, he argued that “Popular rule is always better than the rule of princes.”  You don’t have to read Machiavelli’s other writings too long to find other quotes that conflict with the ostensible thesis of The Prince.

·         So, some of us like to read The Prince as satire and believe that the philosopher was indirectly advocating for the republic model by showing how brutal you had to be to make a principality survive, let alone work.

·         In fact, there are many contradictions even within the pages of The Prince if you look for them.

·         It is an officious, obscenely courteous package of grand flattery – yet it is wrapped around a work that counsels princes to avoid flatterers at all costs.

·         Machiavelli’s use of the widely despised and lifeless Cesare Borgia as a role model for princes also seems like a spoof.

·         In fact, much of the political advice in The Prince when followed through to its stated end is absurd for both the brute and the brutalized.

Political hacks who have been weaned on Machiavelli’s reputation as a dark, calculating political operative find it difficult at first to imagine him as a humorist. Yet he was a very skilled and witty poet and playwright willing to ridicule authorities, like the church, when he had been wronged. His play the Mandrake is quite biting and funny, and in signing letters late in life, Machiavelli referred to himself as a “comic author” as much as a writer on matters more serious.

The idea of The Prince as satire is not new. Rousseau saw it as a noble effort to disrupt the tyrants, and today many experts on the Renaissance are quite willing to consider the notion or, at the very least, that reading the book as satire is a worthy exercise.


Some holdouts not only reject the notion, they get flustered and upset at any such suggestion countering that the book is “too flat and dry” for a creative work and that Machiavelli had no motive to write a satire.

Really ?  No motive to satirize ? 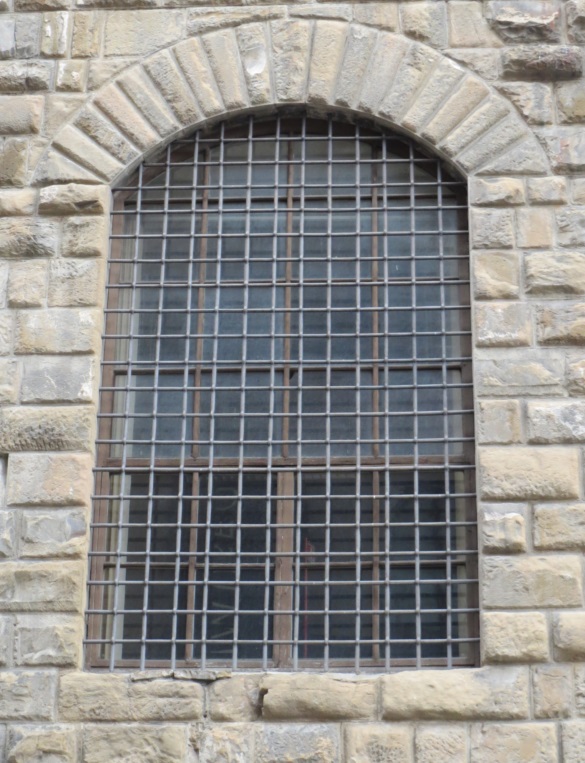 As someone whose cv as a political advisor, secretary to chancery-style bodies, a would-be ethics specialist, and a pretend philosopher, I have no trouble at all postulating one.

Satire is cathartic and a classic diversion for someone on the outs like the post-republic Machiavelli.  And given that he wrote the book for himself and selected friends, it is hard to believe he was not indulging in the great tradition of mocking what hurts as a defense against dread and despair.

The criticism of the book “as too dry” for humour contrasts with the kudos for the Prince as uncluttered and crisp prose free of the cumbersome qualifications that would have characterized a genuine handbook on statecraft.

For me, the straightforward, matter-of-fact style is the only way to write the blend of pathos and humor required by biting satire. It is a quality that characterizes works from those of Jonathon Swift to Stephen Colbert and is one reason why Swift, Colbert, and others were, like Machiavelli, mistakenly seen as serious by large swaths of the population. (It may be a mark of good satire to be widely misinterpreted.) 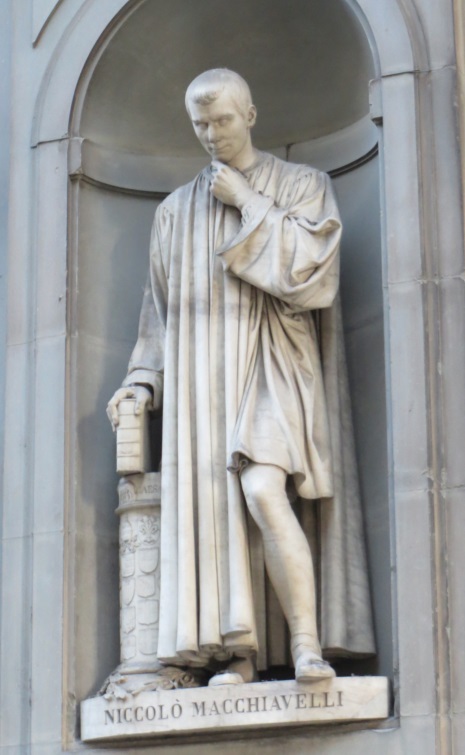 Even more instructive than words are Machiavelli’s actions. He, who sounds so passionate for his ideas, never did present The Prince to its presumed addressee or even intermediaries despite sharing its existence with well-connected friends who would have gotten the joke. It was not published until 1532, five years after Machiavelli’s death and almost two decades after its writing.


Anyway, that’s just my theory as a hoser-kind-of-Machiavelli-clone.


But I would note that the measure of a theory is whether it is coherent and useful to think it.  And I don’t believe we are well-served by believing that the genius of political philosophy found that we need to be brutal, dishonest, and selfish to prosper.


I shiver when I think of the acts taken under this pretext of Machiavellian pragmatism. I tremble not because of the past, but because of the thought of future paranoia and politics justified by references to The Prince as a legitimate handbook.


So, I wrote my little parody as a satire not so much of The Prince but rather of the vision of the book as the perfect manual.   I laugh at the idea that Machiavelli had it all figured out and had successfully deconstructed and reconstructed all the elements of the art of statecraft.  Politics and governing are really just a hair ball of complex and confounding forces that come together and intertwine when the imperfections of humanity and the fussiness of administration confront each other.
Or so my “it’s all f#$ked up” counter theory goes. 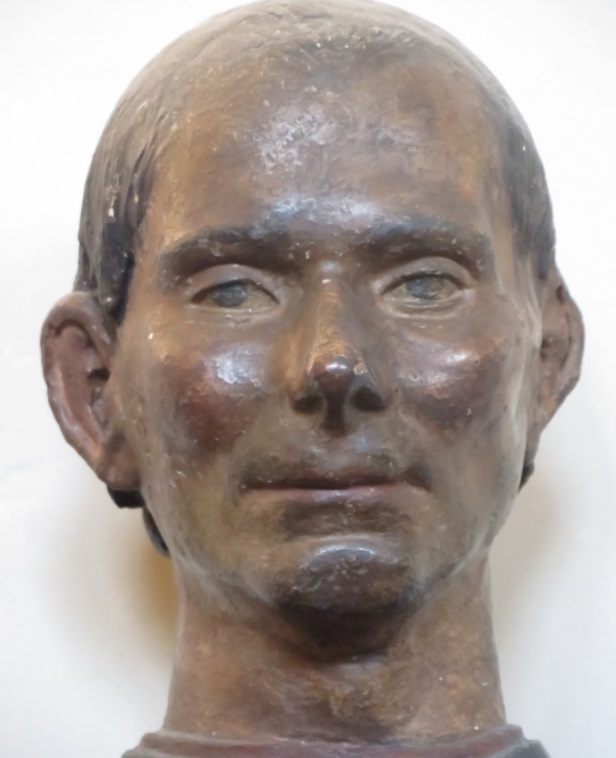 If Machiavelli was sitting in a Tuscan farmhouse today with a connection to the internet and Twitter, he could have put things in context or, better still, maintained his anonymity with an online name like “@LittleNicky”.   He could then have published as a satirist and a living Florentine.  In 2013, we would’ve marked the 500th anniversary of the publication, not just the writing of The Prince, and done so with a hopeful smile instead of a nervous shiver.


Anyway, thoughts like these propelled me through my second trip to Florence which fell in in that 500th anniversary year.  I visited all the Machiavelli sites, talked to people associated with them, and launch the e-book version of my parody of The Prince.   Weeks before my trip, it occurred to me that I could poke the iPad anywhere in the world to publish the Kindle book and that I could 3G it just as easily from Florence as Ottawa.  The idea appealed to me on several levels including the lowest one.

This gutter led right into my decision to push the publish button next to the philosopher’s purported tomb in the Basilica di Santa Croce.  I now think back on that day with unease.


Instead of apt satire, the gesture seems disrespectful particularly if you accept my suggestion that Machiavelli was a genuinely high minded republican whose renowned work was meant to mock the calculating style now associated with his name.   So, in trying to poke at the ends justify the means philosophy and doing things just because you have the power, I e-published my book in a sacred space just because I could, proving once again that “Just because you can do something is not a reason to do it” and that we haven’t come far in the last 500 years.