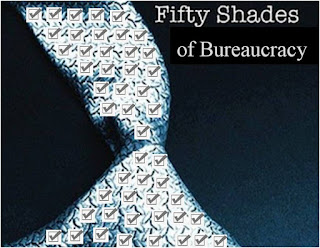 “You don’t have enough sex.”

“Why ? - you got some kinda psychological problem, Mr. Swallow ?”

“No, it’s just that I am not sure how to do it, and it makes me uncomfortable. Maybe, I’m too old.”

“That’s ridiculous, some of the randiest writers I work with are your age.”

I appreciated that the man was trying to help, but I still felt awkward. He was a professional book editor and literary agent hired on contract by the Branch Director to coach me on writing.

My group needed to write a vital internal memorandum on the assessments and process improvement initiatives pursuant to the introduction of the Department’s new framework for the management of accountability and performance relative to internal procedures for measuring the impact of accountability management systems.  We had to get the messaging right and convey  excitement of our management.

I was given the task.  It would tough, but the boss told me that I would be supported by a top notch consultant as money was no object and unlimited resources were available for any project tied to the financial accountability agenda.

Donald J. Ferguson was a senior editor with the Castorian subsidiary of a prosperous international publishing house. Having few market worthy titles to review in our country, his firm made him available for consulting work and for vaguely worded government contracts.

“Look, Mr. Swallow, I was hired for my expertise, and I suggest you take my advice,” he said with a look that suggested he actually cared. “You can’t be a solid writer unless you know how to inject sex into your scripts.”

“OK, but I fear that anything I write will be taken as inspired by some intimacy with my girl friend, and I would not want to embarrass her,” I said.

“Well, just tell everybody it’s about sex with somebody else,” he said. “Maybe, even put that in a footnote to your memo.”

“You mean, people would still guess it was you?” he asked in the tone of genuine curiosity.

I looked at the floor and put my fingers on my temple.

“Ok, Ok, if you can’t bring yourself to describe the act, there are a few tricks I can teach you - suggestive metaphors, racy adjectives, and the like,” he said. “Write ‘em down and then you can use ‘em later in your tight-azz bureaucrat memo without getting too explicit - and feeling all prickly - geeze, you’re something.”

I pulled out my laptop, booted up, and prepared to type.

“Now when you’re talking about something new like your accountability thing you have to use dreamy, gentle words - say the program was “opening up like a flower ” or “the outline of its soft form was barely visible ” he explained. “But when you want to communicate about something that's based on a lot of experience and been around the block, you say - flaming, aggressive, hot-blooded, and enlarged.”

I started to understand where he was going and to think about the possibilities.

“And it’s always good to use food metaphors,” he added. “Like squeezed and tossed - and say she - you can call your policy a she ? right ? - say she was delectable, mouth- watering, luscious, scrumptious and, of course, you can always use evocative but hazy terms like - the gnarly bits.”

“Golly, I’m not sure about that,” I mumbled to myself.

“And whenever you can - jump from all that stuff suddenly into getting up the next morning - together,” he concluded. “You can do it - Just close your eyes, type, and think of your Prime Minister.”

Ferguson then asked me to sign a form attesting to the fact of our training session and his presence at it.

It was the last I ever heard of him, but his advice about combining sex and my government memo writing vocation dominated my thoughts over the following days and led me to an associated epiphany.  I wrote out a new sex-job memo. One to my boss.