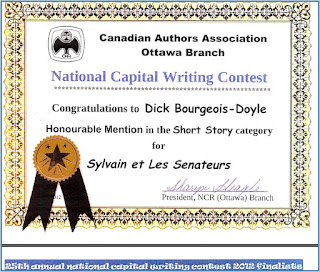 The limits of my writing achievement ambitions are perhaps evident in the pleasure and pride I drew from an Honourable Mention in the NCR Canadian Authors Association Short Story Contest this spring (2012).  My entry  – Sylvain et Les Senateurs – is the tale of an Ottawa hockey fan whose deal with the Devil revolved around the 2007 Senators bid for the Stanley Cup.
Evidently, I am either a model of humility or I can find conceit in any award for writing as the Judge's qualified accompanying comments (read out loud in a nice way while I stood on stage) might have served to keep other, less cheery contestants in their place.
“A Faustian Satire about Hockey ?  Oh, yes, it can – and did – happen. Poor Sylvain. Faust bartered his sole to the Devil for unlimited knowledge and worldly pleasures.


Sylvain just wanted his Ottawa Senators to win the Stanley Cup.
It’s not easy to write good satire, but this comes close – and the author never loses Sylvain’s voice. By the way, your judge is not even a hockey fan.”
"Comes close  - to ... good !"   Is that the same as "not good" ? Who cares ? As a recognition, it sounds very Canadian and makes this a very worthy member of the Top 10 Canadian Writing Awards.
The 1st, 2nd, and 3rd place Winning entries in the CAA 2012 contest were read out at the event.  My wife and I had to admit they were pretty good  - moving, richer, and more worthy than my attempt.  But for me, it was gratifying to have mapped the Sylvain story in a logical way against the actual events of the 2007 Stanley Cup Final.  An accomplishment that may be impressive only to me and a handful of unremittingly mournful Senators’ fans.
Before sharing with family, I was tempted to edit the Judge’s comments into something like the ellipsis-filled review clips in a movie poster: “Oh, yes ... unlimited ... pleasures ... good satire ... judge is ... a ... fan.”
In the end, I sent a scan of the Honourable Mention award and judge’s comments to my sister and her husband in North Bay – intact and unedited. My brother-in-law replied saying that he came "close to" congratulating me for it, but fell just short.
Great.  More “close-to-good” Canadian satire.