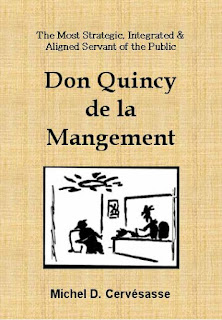 The Most Strategic Integrated and Aligned
Servant of the Public
Don Quincy de la Mangement
by  Michel D. Cervésasse

The Ottawa book launch of a novel that satirizes life in a government by parodying a classic of Spanish literature.
Chapters - Gloucester Centre
2401 City Park Drive (at Ogilvie Road)
Thursday December 8, 2011

The Most Strategic, Integrated and Aligned Servant of the Public Don Quincy de la Mangement is a light-hearted, yet barbed novel that traces the adventures of “one of those old fashioned civil servants” in a satirical 21st century echo of The Ingenious

Gentleman Don Quixote of La Mancha.   In this new book, a multi-sided parody of Don Quixote, the hero loses his wits not from the excesses of chivalry and knighthood, but from undue exposure to government memos, briefing notes, emails, and the presumptions of public administration.

“Don Quincy” is a government administrator working in the secretariat of an advisory board that never meets, a circumstance that gives him too much time to wade in the deluge of emails, policies, and directives flowing from the higher levels of his and other government agencies.

As he absorbs and then shares the notions and vocabulary  of public administration, Don Quincy is plunged into a series of awkward, but illuminating experiences,  such as the “Terrible un-dreamt of” initiative of the offshore windmills, “the Ill-advised Curiosity” allegation of wrongdoing, and “the Cost Recoverer’s tale,” with unmistakable parallels in the early 17th century life and adventures of Don Quixote.

The book thus has a particular appeal to lovers of the classic.

But the author says he wrote the story, started as a satirical Blog, to amuse colleagues in government and mock the contradictions in public management systems and theories.

The book cover and online references identify the writer as “Michel D. Cervésasse” (an obvious pseudonym-homage to Spanish beer and Quixote author Miguel de Cervantes) with Amazon.com’s author bio describing Cervésasse as “a non-existent, imaginary, and fictitious person, maybe even a group of people, or an inanimate entity, who wishes to deny his, her or their true identity…to use a name that seems more distinguishing, aesthetic, and apt in the circumstance.”  The bio also allows that the author's true identity might be Dick Bourgeois-Doyle, a writer in Ottawa Canada, whose previous works have been largely peer-reviewed books on the history and philosophy of science, technology, and invention issued by an authoritative publisher of science journals.

Working daytime in corporate governance in a Canadian government institution, Bourgeois-Doyle probably has the experience to inform the tale of "Don Quincy." His government career has included time in a number of departments and agencies as well as terms as a Chief of Staff to federal cabinet ministers.

“I love Don Quixote and could read it endlessly,” says Bourgeois-Doyle. “Because the first edition was shipped centuries ago across the Atlantic to the New World where books were highly valued, I took the first copies of the parody back the other way to underline it as a tribute, albeit a peculiar one, to Cervantes (see Don Quincy in Madrid - August 2011) - I am delighted to make it available now in Canada's capital."

In the fanciful Preface and Dedication (to Oprah and her Book Club), the author indirectly confesses a fear that Don Quincy de la Mangement might be seen more as a “theft” and a “slur” than a compliment to the revered Quixote author.  In any case, it is clear his central ambition is to amuse and comfort government workers.

“So far, I am told the book’s greatest use has been as a gift for retiring or laid-off civil servants,” says Bourgeois-Doyle. “It makes it easier to leave government life behind.”

It may be a market with growth potential.

Don Quincy de la Mangement
is available in paperback
and Kindle formats
from Amazon.com or
http://donquincy.wordpress.com/about/

For Review Copies or other Info:
Stubbornbook@gmail.com
Phone (613) 424-2374
stubborn
How to Buy Don Quincy Book