The Most Strategic, Integrated and Aligned Servant of the Public
Don Quincy de la Mangement
By Michel D. Cervésasse
(©Stubbornbooks 2011)

The book launch, which also celebrates the 400th anniversary of the first English translation of Don Quixote (completed 1611- published 1612), will be held at

Dick Bourgeois-Doyle (Michel D. Cervésasse) A former broadcaster and journalist, Bourgeois-Doyle has contributed to articles, TV features, and radio programs on science history. His other biographies include the Canadian Science Publishing (CSP) books: George J. Klein: The Great Inventor, the story of the man regarded as 20th century 's most productive inventor, and Her Daughter, the Engineer: the Life of Elsie Gregory MacGill, the world's first woman aeronautical engineer. He was also Editor of Renaissance II: Canadian Creativity and Innovation in the New Millennium, a book that flowed from a series of conferences and symposia linking creativity in the arts and sciences. Bourgeois-Doyle wrote the 2010 General Store Publishing House biography Stubborn: Big Ed Caswell and the Line from the Valley to the Northland.

Don Quincy de la Mangement is available in paperback and Kindle formats from Amazon.com or http://donquincy.wordpress.com/about/ 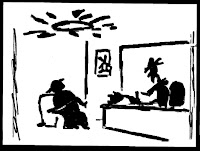