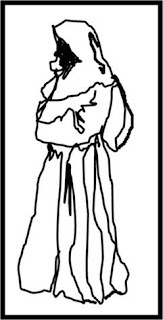 The star-filled sky and bright moon not only drew the young Prince out onto his balcony, but also allowed a glimpse of the shadowy figure creeping from the rear of the castle that night.
Hooded and burdened down with a large sack, the being had the air of unease and ill intent.   There was no time to call the guards. Prince Innocenté dashed down the stairs and onto the cobblestone just in time to see the tail of a cloak disappearing into a back street.
“I cannot stop, I must follow,” the Prince said in a wheezing breath. “Greatness only knows what this brute has taken from my most royal family.”
Although the hooded figure moved slowly, it stopped repeatedly to look backwards and around. The Prince had to keep his distance and almost lost his prey many times that night.  The hesitant chase ran over twelve city blocks. Finally, the figure from the shadows stopped, knocked on a door, and entered a huge stone building. The Prince recognized it as the anterior of the Sisters of Simplicity nunnery.
“Father !!,” the Prince gasped at the window as the hooded man inside unveiled himself and opened his sack.
King Generoso reached into his bag and handed a bulging purse to an elderly nun who then kissed the King’s forehead and squeezed his hand. The Prince instantly resolved to remain at the nunnery doors until he could stop and question his father. He did not have to wait long.
“Please let this be, my son,” said the King when confronted. “It is nothing, believe me.”
But the Prince would not let the issue go and beleaguered his father relentlessly on the walk back to their castle home.  Finally, Generoso relented with his son’s pledge that the explanation would remain between them forever.
“For decades, I have lived with unbearable humiliation and remorse because every time a peasant freeman dies, his estate must be forfeited to the crown,” said the King in a shaking voice. “The widows and orphans are left behind to live in doom while the royal coffers are fed.”
“Why have you not decreed an end to this onerous law ?” asked the Prince.
“Son - the barons, the lords, and lower nobility also share in this plunder, and they threatened the overthrow and assassination of the entire royal house if I should ever do so,” said the King. “So, I resolved to secretly direct my share of these funds to the Sisters and their good works for the widows and orphans of our realm.”
For many years, the Prince kept his word and watched with humility from the balcony whenever the hooded figure in grey pauper clothes left the castle at night. But in time, unrest overtook the land as resentment of the loathsome death tax payments spread. At the same time, the nobles, who had profited steadily, expanded their defenses by pilfering the best of the royal guards with lucrative inducements funded by the estates of dead freemen. The immoral and decadent nobles also directed armaments and food stores to the rebellious to ensure their vexation kept its focus on the King.
Months of minor clashes and attacks in the hillsides culminated in a full rebel assault on the castle. “Death to the King ! Death to the King !” echoed around its walls.
As the angry hoards climbed the steps to the royal suites, Prince Innocenté appeared with a cross in his hand pleading an audience with the rebel leaders.
“You have been duped my friends by political affairs evil, avaricious, and most foul,” the Prince said. “And once you know the truth, I am confident you will redirect your rage and quest for justice.”
The rebels listened with eyes squinted and teeth scratching their lips as Innocenté laid out the story of how the hated laws had been maintained by the lower nobles and how the King had sought to make amends.  The Prince showed evidential materials and receipts from the Sisters to attest to his father’s acts and to prove that the death tax money and confiscated proceeds had found their way, via the nuns, to deprived women and children.
The rebel leaders stared at each other, lifted their swords in the air, and walked back to face their followers.
“Death to the nuns, women, and children !! Death to the nuns, women, and children !” they shouted as the mob turned, headed down the steps, and marched out into the city streets.
Buy the E-book